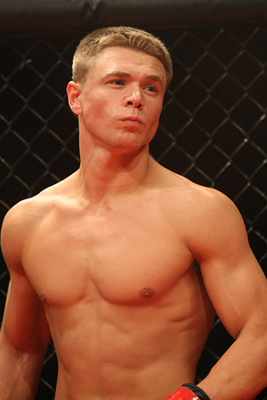 Fighting for a major organization has made Chris Wade ineligible for regional rankings.

A talented wrestler, Wade attended Islip High School where he was a state champion as well as a two-time Suffolk County finalist and a Suffolk County Champion. Wade continued his career at the collegiate level where he was a NJCAA National finalist for Nassau Community College and had a NCAA Division III fifth-place finish for SUNY Oneonta. Wade also competed in amateur kickboxing, where was undefeated and held a title.

Wade had an amateur MMA record of 2-0 before turning professional in 2011. Wade then compiled a professional record of 5-0 and won the Ring of Combat Lightweight Championship before being signed by the World Series of Fighting.

Wade made his WSOF debut at WSOF 2 on March 23, 2013 against Russian prospect Azamat Dugulubgov. Wade lost via unanimous decision.

Wade returned to the local circuit and won both of his next two fights before being signed by the UFC.

Wade made his promotional debut against Cain Carrizosa on August 30, 2014 at UFC 177. Wade won via technical submission from a guillotine choke in the first round.

Wade was expected to face Olivier Aubin-Mercier on August 23, 2015 at UFC Fight Night 74. However, Wade pulled out of the bout in late July after sustaining an injury and was replaced by Tony Sims.

Wade was expected to face Mairbek Taisumov on January 17, 2016 at UFC Fight Night 81. Subsequently, Taisumov was pulled from the fight during the week leading to the event due to alleged visa issues and was replaced by promotional newcomer Mehdi Baghdad. Wade won the fight via submission in the first round.

Wade was expected to face Rashid Magomedov on May 8, 2016 at UFC Fight Night 87. However, Magomedov pulled out of the fight in early March and was replaced by Rustam Khabilov.