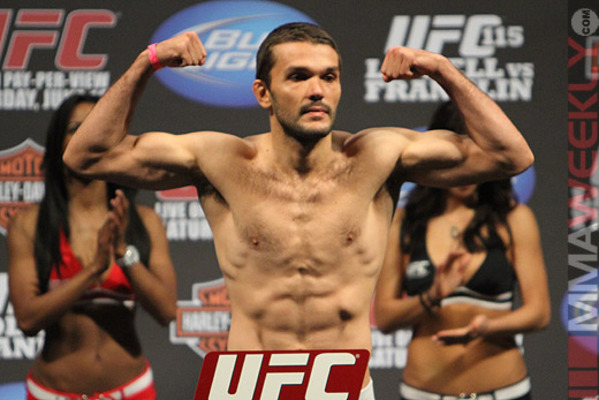 Fighting for a major organization has made Peter Sobotta ineligible for regional rankings.

Sobotta is born in Zabrze Poland but grew up in Germany. He trained Judo and Taekwondo before falling in love with Brazilian Jiu Jitsu.
He currently holds a brown belt in this discipline under Dean Lister.

He started training MMA at the Martial Arts School UCS Geislingen and had his first professional MMA fight with the age of 17. After a 8-1 start to his MMA Career, Sobotta signed a 4-fight deal with the UFC, but after losing his first 3 bouts via unanimous decision to Paul Taylor (on the first ever event in Germany at UFC 99 in Cologne), James Wilks and Amir Sadollah (on German turf in Oberhausen at UFC 122), his management asked UFC officials to terminate Sobotta's contract early after only 3 fights.

Since leaving the UFC, Sobotta went 5-0-1 in smaller promotions, finishing all of his opponents by rear naked choke in the first round.

Despite pursuing his own career as a fighter, Sobotta also works as an instructor for the German Free Fight Association and as a coach/cornerman for fellow german MMA fighters such as Pascal Krauss, Andreas Kraniotakes or Gregor Herb. In 2010, Sobotta opened his own gym, the Planet Eater Gym, based in Steinhofen (Germany).

He went with the jamaican flag at the weigh ins of UFC Fightnight 109 wanting to spread the "ONE LOVE" message rather than being loved by one part of his heritage but therefore being hated by the other. On December 9, 2017 he married his wife Lisa Sobotta and they have a child together.

He got resigned to the UFC and won against Pawel Pawlak at UFC Munoz Vs Mousasi and against Steve Kennedy at UFC FIGHT NIGHT 69.

That same year around november he got TKO ed by Kyle Noke in Australia at the legendary UFC 193 event in the first round.

Since then he fought Niclas Dalby at UFC Arlovski VS Barnett and won via unanimous decision.

Sobotta won against Ben Saunders at UFC Gustafsson Vs Teixeira via TKO in the second round.

He then got finished by Leon Edwards at UFC Werdum Vs Volkov in the third round via punches.

Peter Sobotta is about to fight the other cowboy in the UFC, Alex Oliveira at the UFC Fight Night Whittaker VS Till on fight island.