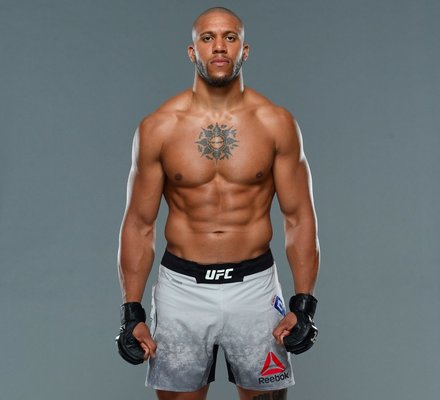 Fighting for a major organization has made Ciryl Gane ineligible for regional rankings.

Cyril Gane, born 12 April 1990 is a French mixed martial artist who competes in the heavyweight division of the UFC. He is a professional competitor since 2018, he has also formerly competed for TKO where he was the Heavyweight Champion.
In his next fight he competes against Junior Dos Santos, December 12, 2020 at UFC 256

Early career: Coached by Fernand Lopez, Ciryl Gane made his professional MMA debut in 2018. He was first contracted to the Canadian MMA promotion TKO, where his first fight was for the vacant TKO heavyweight championship, against Bobby Sullivan. He won the title fight in the first round through a front choke. He defended the heavyweight championship a month later against Adam Dyczka, winning the fight in the second round via a TKO. His third fight in TKO, and his second title defense, was against Roggers Souza, which he won in the first round by a TKO.
UFC: Gane made his promotional debut on 10 August 2019 at UFC Fight Night: Shevchenko vs. Carmouche 2 against Raphael Pessoa. Gane won the fight by an arm triangle choke at the end of the first round.
Gane faced Don'Tale Mayes on 26 October 2019 at UFC Fight Night: Maia vs. Askren. Gane won the fight by a heel hook in the third round, earning him a Performance of the Night bonus.
Gane faced Tanner Boser on 21 December 2019 at UFC Fight Night: Edgar vs. The Korean Zombie. He won the fight via unanimous decision.


Gane was scheduled to face Shamil Abdurakhimov on 18 April 2020 at UFC 249. However, on March 5, 2020 it was announced that Gane was forced to pull out from the event due to struck by pneumothorax during one of his trainings. The bout was eventually rescheduled for July 11, 2020 at UFC 251. Subsequently, the pairing was cancelled a second time and scrapped from this event in mid-June as Abdurikhimov was removed from the bout for undisclosed reasons. In turn, Gane was expected to face Sergei Pavlovich on August 8, 2020 at UFC Fight Night 174. Pavlovich however had to pull out because of an injury  Therefore the original fight against Shamil Abdurakhimov was scheduled again on 26 September 2020 at UFC 253; however, the bout was rescheduled again to UFC Fight Night 180 on October 18, 2020. The bout fell through once again as Abdurakhimov pulled out due to undisclosed reasons on September 28, 2020 and he was replaced by promotional newcomer Ante Delija. On October 14, 2020, it was announced that the bout was cancelled due to Delija's contractual problems with his previous deal with the PFL.