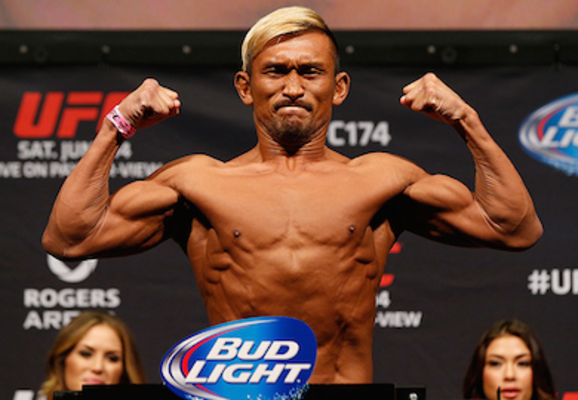 Fighting for a major organization has made Kiichi Kunimoto ineligible for regional rankings.

Kunimoto is a Welterweight fighter in the UFC where he is currently 2-0. He has also fought in Pancrase and HEAT. He holds notable victories over Daniel Sarafian, Luiz Dutra Jr, and Kengo Ura. He trains out of Cobra Kai Dojo under Dokonjonosuke Mishima.

Kunimoto was a professional skateboarder before his MMA career and he didn't get into martial arts until he was in his 20's. He earned his nickname of Strasser from none other than Dave Strasser. Kiichi was training at Dave's gym in the US and while at a BBQ he declared that Kiichi needed a fight name so he took on the Strasser name.

He fought most of his early career in Pancrase where he started to make a name for himself by defeating former King of Pancrase Kengo Ura and later earned a shot at the Welterweight title, losing to fellow UFC fighter Takenori Sato.

After losing the title match Kunimoto would head to Japan's longest running cage promotion in HEAT to prepare for possible opportunities in the UFC. He would go 4-0 with 3 submissions, win the Welterweight title, and pick up a win over former UFC and WEC fighter Edward Faaloloto.

In late 2013 it was announced that Kunimoto had signed with the UFC and would debut at UFC Fight Night 34. He made his debut against TUF Brazil 2 member Luiz Dutra Jr.. Kunimoto would pick up a less than satisfying win after Dutra was disqualified after landing multiple elbows to the back of the head. Next he fought TUF Brazil Middleweight finalist Daniel Sarafian. Kunimoto was a heavy underdog but ended up completely dominating the fight and winning by Rear Naked Choke in the 1st round also earning a Performance of the Night bonus.