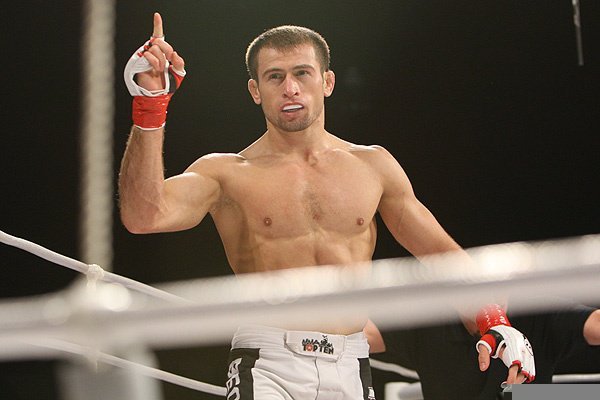 Mairbek Taisumov is ineligible for regional rankings due to inactivity.
Fighters must have at least one completed MMA bout in the past two years to be ranked.

Mairbek Taisumov is a Chechen lightweight fighter currently signed to the UFC. He fights out of Vienna, Austria. He has spent much of his career fighting for M-1 Global where he has a 9-2 record. Of his twenty one career wins, he has finished twenty of them including eleven T/KOs.

Taisumov began his professional MMA career in 2007. His sporting career began as a professional soccer player and he began training in freestyle wrestling before taking his first fight in 2007. He quickly became a fan favorite with his aggressive striking style and heavy ground and pound attack. He would take a fifteen month break from competition after his first fight, but upon his return, he would compile a 10-2 record in the following two years in various promotions throughout Europe.

In his first M-1 lightweight title shot, Mairbek would fall to Artiom Damkovsky by third round doctor stoppage after an accidental eye poke at M-1 Challenge 21. This snapped a seventeen month, seven fight win streak. After this loss he would bounce back with 5 straight finishes before dropping a split decision to well-respected grappler, Marat Gafurov. Taisumov was supposed to get his second chance at claiming the lightweight title at M-1 Challenge 35 against then champion, Musa Khamanaev, but the fight was cancelled for unknown reasons. He would instead take on Leon Del Gaudio at the same event and picked up another first round submission. He would take on Niko Puhakka at M-1 Challenge 40 and picked up a TKO victory. He was able to avenge one of his earlier losses when he defeated Artiom Damkovsky by third round submission at M-1 Challenge 44.

Taisumov was picked up by the UFC in late 2013. He made his promotional debut at UFC Fight Night 34 in Singapore against Tae Hyun Bang. He would win the fight by unanimous decision marking the first win of his career that was not a finish. He would lose a decision to Michel Prazeres in his next bout. He would rebound picking up two wins with TKO's over Marcin Bandel and Tony Christodoulou.