Matt Mitrione defeats Tim Hague via KO/TKO at 2:59 of Round 1 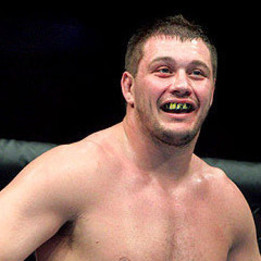 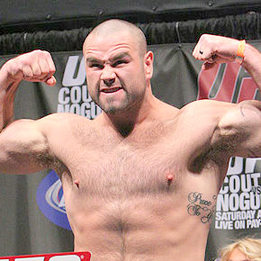 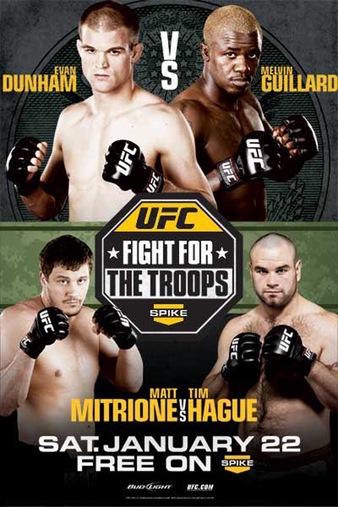 Former TUF contestant and NFL football player Matt "Meat" Mitrione once again made his case as not only a serious mixed martial artist, but a potential divisional contender, with a knockout win over the sturdy Tim Hague at UFC's Fight for the Troops event on Spike TV.

Mitrione's first round KO was the second of three such conclusions to end the night, and came courtesy of a powerful left straight down the pipe that dropped Hague just under the three minute mark. Some perfunctory shots to the downed Hague finished things off as referee Dan Miragliotta separated the two fighters and waved matters off. Joe Rogan's in-fight commentary once again focused on the unusually dexterous footwork shown by the 260 lb. Mitrione, who showed himself able to stay light on his feet despite being one of the UFC's biggest fighters. He proved more maneuverable than Hague, who had found himself invited back inside the Octagon for his third stint in the promotion after some impressive performances outside it.

The pre-fight talk centered on Mitrione's tendency, irritating to some opponents, to smile his way through his Octagon encounters. Mitrione swore he would smile again throughout, and do so afterwards as well, and the prediction came true. He beamed through the post-fight interview, in which he paid homage to 135 pound champion Dominick Cruz. “I wanted to be a 265 pound Dominick Cruz,” said Mitrione. The win moved him upwards in the heavyweight divisional ladder as Hague once again found himself clinging to his job in the world's biggest promotion.

RT @BigSexyMcCorkle: follow @Jennifer_Swift AKA Ms Tapout. That is unless you're not into girls. I'm talking to you @mattmitrione

(mod post) - Tim Hague released from UFC after Matt Mitrione Fight. Get better, then get back into the game Tim. http://fb.me/SWlq8gNV

Yup. Its on my FB fan page under info. RT @RobertsShawn: @mattmitrione you do any autographs through the mail?

If someone wants me there, I'll be there. RT @dalerose10: @mattmitrione Are you going to be at the fan expo for ufc 129

This year, Pack. Next year...Da Bears. RT @Gueci: @mattmitrione who u got winning the super bowl?

In the process. Forgot what his twitter handle is. Good fella though. RT @DukeSkywalker: @mattmitrione did u ever fix that laptop?

Wow, very cool of you to say. Thank you! RT @MacKraut: Springfield is proud of ya, keep being @mattmitrione!

Thank you! RT @Jman2k3: I know right @HeymanHustle The way @mattmitrione has been fighting he will be a force to contend with for sure.

Mos def shun. Baleeeee dat RT @rarellano15: @mattmitrione if I were to make it to those springfield fights can I get an auto?

Thanks! RT @DirectorPatrick: @lorettahuntmma @mattmitrione is the real deal. Great attitude and work ethic. I see big things in the future.

Honored, but was just a good match up that's all RT @lorettahuntmma: @mattmitrione Still have to see your fight, but am hearing good things

Yesssssssir!!! RT @SinCityMMA: @LVFIGHTSHOP Great, now i gotta take my wife to the mall on saturday to see her Boyfriend @mattmitrione

Indianapolis tweeters: I need a computer guy to fix my laptop. Got a virus that ruined it today. Need help ASAP please.

Shout out to all my fans who have been sending positive comments. I love you guys. I'll be back kickin ass soon.

Living the dream today. Hanging out w my almost 2 yr old and knocking out interviews. Eating best salad ever and... http://fb.me/SGbz3wN6

I wonder if I could make 205....? I honestly think I might be able to, and I like challenges that don't seem possible.

@TheDomin8r hey bud, I'm kicking my self for not meeting you but it was cool to see you at fight for the troops.

Laying around waiting for the van to take us to the weigh ins. Been eating lightly to ensure I make weight. I've... http://fb.me/Sen5IzIk

It's fight week Team Meathead! What are you most looking forward to for this weekend's fight? (mod post)

@brianstann big fan of how u conduct urself. Very classy and entertaining fighter. Look forward to meeting u someday

Just finished my last workout with @SharaVigeant at SVPT!!! Headed south of the border tomorrow. So pumped to be done training.

@HyepOrDie @mexictuiner760. Glad to hear I'm not the only one excited to be done training camp. See you cats on Tuesday.

Should I be eating these popeye's chicken strips with ranch dressing on them with these biscuits and honey? Damn its so good.