UFC 214 is the card of the year on paper. Let's hope it delivers.

Prelims kick off on UFC Fight Pass at 630pm ET before switching to something called FXX at 8pm. PPV main card, as always, kicks off at 10pm. 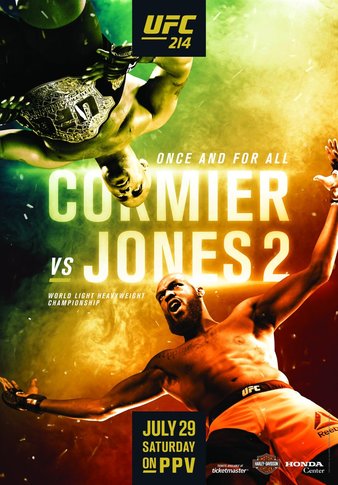 I'm fully expecting to get off work tonight and see that DC/Jones is off. I'm not getting my hopes up this time.

I hope it is not off.  I heard that DC made weight now.

I'm kinda rooting or Oezdemir although I have no problem with Manuwa, Lawler/Cowboy would only be an upset if it was boring, no real rooting interest in Cyborg/Tonya but an upset there would be nice as well, and Maia winning would be a great feel-good story but I would trade all of those outcomes for a DC win because it would be great for the sport, the LHW division, and karmic justice.

Skelliher, how dare you reference a great line from the greatest story if it's about Jones. The only character in LOTR he would be fit to play would be Sauron or the leader of the ring-wraiths/king of Angmar which would be fitting because both were finished off by hobbits or "undersized competitors" :D


Finally, a fight card I have been hyped about to watch from top to bottom.  Let's do this ****.

When was the last time you were this excited about a UFC event?

Volkan Oezdemir is going to pull off what looks like a fluky finish to the untrained eye but it’s no fluke. Oezdemir will look like a GOAT because he is the GOAT. I predicted that he will be the LHW UFC Champion and I have no reason to think otherwise.

Cyborg vs. Other Gal

I see a lot of people picking Cyborg by default without doing any research. Well guess what? I’m picking the other gal and I haven’t done any research either. Other Gal 50-45.

In my prediction, I’m going to assume this fight is going to happen tonight. I may have divine powers gifted from God but even I don’t know if someone is going to **** up in the clutch.

The world wants to see Jon Jones get knocked out. It would be the most epic outcome of all possible outcomes. Why would God not make that happen?

So let’s think logically. DC could maybe win by decision via wrestling but you risk burning too much energy especially against someone like Jones. Jon Jones has a 12.5” reach advantage. DC could try to going inside and box but you risk going blind from eye pokes. So how is DC going to win?

In fact, we’re going to see the greatest performance from DC since Wonder Woman.

Late in the fifth, I predict that Daniel Cormier will run off the wall like a ninja and land the GREATEST head kick of all time! IT IS ALL OVER! Good beats evil. ***** beats ****. Crack is whack. All is well in the world.

@WorstPredictionMan That's all fine and dandy, but how do you explain Curran KO 2 and Shelton sub 1??? Will the first one involve twerking?


"One does not hunt in order to kill; on the contrary, one kills in order to have hunted. If one were to present the sportsman with the death of the animal as a gift he would refuse it." Jose Ortega y Gasset

@WorstPredictionMan is my favorite troll.

Wasteland could learn a lot from him.


Excitement growing with the starting hour approaching to begin the biggest card of the 2017!!!

I'm hoping for a memorable night!

" “To see a man beaten not by a better opponent but by himself is a tragedy.” – Cus D’Amato"

Can't wait for the fights tonight. The fightpass prelims aren't anything to rave about, though I like the Brooks/Shelton fight quite a bit, but after that it should be pure violence with the potential for just utter craziness at any moment.

"If it's not a challenge, it isn't fun enough."


"Ohhhhhhhh ****! Look at that door, dude. See that door there? The one marked "Pirate"? You think a pirate lives in there?"

This card is so awesome!A handful of roll the dice fights for me here and even including the main event for me.

Nobody wanted to accept Volkan's box of chocolates at the weigh-ins so I hope he wins based on that alone.