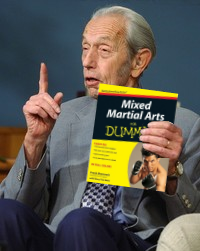 What is this? 2nd Degree Purple Belt
my rank

"Today, I consider WorstPredictionMan the luckiest man on the face of the earth." -Lou Gehrig

Undisputed winner of every event ever.

3x Tapology Rookie of the Year

Tapology Defensive Predictor of the Year

Tapology Most Improved Predictor of the Year

Member of the Tapology Hall of Fame

1994 Winner of the Nobel Prize in Predicting after successfully predicting that Judgment Day would occur on or about September 6, 1994

2011 Winner of the Nobel Prize in Predicting after successfully predicting that Jesus Christ would return to Earth on May 21, 2011, where upon the saved would be taken up to heaven in the rapture, and that there would follow five months of fire, brimstone and plagues on Earth, with millions of people dying each day, culminating on October 21, 2011, with the final destruction of the world.