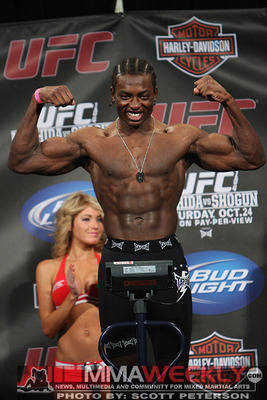 Razak Al-Hassan is ineligible for regional rankings due to inactivity.
Fighters must have at least one completed MMA bout in the past two years to be ranked.

Razak Al-Hassan had won his first seven MMA fights before taking on former WEC Light Heavyweight Champion Steve Cantwell in his UFC debut in 2008. Al-Hassan lost that fight by Armbar, and after losing a Split Decision to Kyle Kingsbury in 2009, he was cut from the promotion. Al-Hassan has since earned a notable TKO victory over MMA veteran Sherman Pendergarst.

Known for his unorthodox style of striking as well as for his impressive ring movement, there is still ample time for Al-Hassan to realize his potential at the highest levels of the sport.