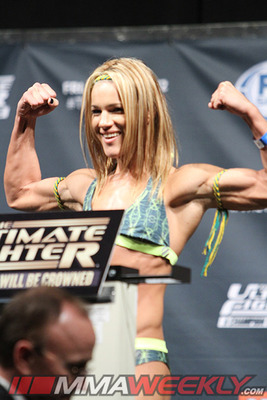 Fighting for a major organization has made Felice Herrig ineligible for regional rankings.

Herrig is a Strawweight fighter with an extensive background in Muay Thai and Kickboxing. Her Kickboxing record is 23-5 and she has won multiple International Kickboxing Federation titles. In MMA she has fought for Bellator and XFC. She holds notable victories over Patricia Vidonic twice and Michelle Gutierrez.

Herrig currently fights for Bellator where she is 3-0 with wins over Patricia Vidonic and Jessica Rakoczy. Herrig is set to face Heather Clark at Bellator 94. She would win the fight by Split Decison and there was a couple of swings after the bell by both fighters.

Her next fight was on invicta fc 7 against Tecia Torres she lost the fight by unanimous decision.

she had a rematch with Heather Jo Clark. Herrig won the fight by unanimous decision.

In her next fight on episode 9 of the show herrig faced Randa Markos. Markos defeated Herrig by armbar in round one.

Following the conclusion of the Ultimate Fighter, Herrig was then slated to face cast mate Lisa Ellis at the season finale. Herring would go on to win the bout via 2nd round arm bar.

Her next fight was on UFC on fox 15 against Paige Vanzant. She lost the fight by unanimous decision.

After this loss Herrig went on a four fight win streak defeating kailin curran by submission and Alexa Grasso, Justine Kish and Courtney Casey all by way of decision. Her next fight was against Karolina Kowalkiewicz on UFC 223 where she lost a close fight by split decision. On UFC 229 Felice Herrig faced Michelle Waterson the karate hottie. Herrig lost the fight by unanimous decision putting her self on a two fight losing streak which hadn't happened since 2009 in her first two mma bouts.