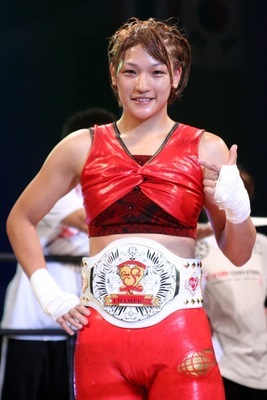 Fighting for a major organization has made Rena Kubota ineligible for regional rankings.

Rena is a kickboxer and shoot boxer with a combined record of 31-5-1 in the two. She is the current Shoot Boxing Women's Flyweight champion and a 4 time Girl's S-Cup winner (2009, 2010, 2012, 2014). She is undefeated in S-Cup competition and is widely considered the face of female Shoot Boxing.

While Rena has yet to make her MMA debut, she has beaten a number of MMA fighters in the Shoot Boxing ring including current DEEP JEWELS champion V.V Mei, Seo Hee Ham, Hisae Watanabe, Emi Fujino, and Saori Ishioka among others.

When previously asked about crossing over to MMA Rena strongly insisted that she had no interest. However, she later decided she needed a new challenge and accepted a deal to make her MMA debut at RIZIN Fighting Federation's debut event on New Year's Eve 2015. She currently trains at Abe Ani Combat Club which is well known for producing elite female fighters. She trains alongside WMMA legend Megumi Fujii and current Invicta FC champ Ayaka Hamasaki.