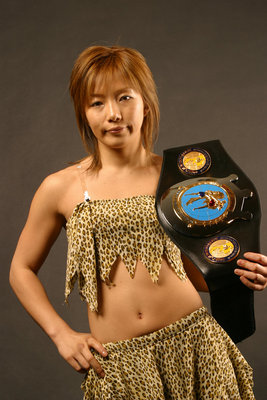 Watanabe is a now retired former DEEP Women's Lightweight (106 lbs) champion. She is recognizable by her signature 2 piece leopard print outfit. She has fought in Smackgirl, Pancrase, and DEEP. She holds notable wins over Mari Kaneko, Naoko Omuro, and Satoko Shinashi.

Hisae would lose her first fight by an illegal upkick, then win her next 2 including a win over Omuro. Her win streak was snapped by a loss to Mari Kaneko by armbar. Hisae would then join the Smackgirl: Japan Cup 2002, she made it through the first 2 rounds, winning both by T/KO. This set up a match against then undefeated Satoko Shinashi in the Grand Final. She would fall to a heel hook in the 2nd round. Watanabe was just getting started however.

Hisae would rattle off 4 straight wins, 3 by KO and then enter the 2004 Golden Muscle: Strongest Queen Tournament. She cruised through the first 2 rounds winning by KO and submission. In the final she got a chance at revenge against Kaneko. Hisae would earn the decision to become Strongest Queen Tournament champion. She went on to make her Pancrase debut and won her first 2 fights in the promotion including a 2nd victory over Omuro.

She then returned to Smackgirl to challenge Yuka Tsuji for the inaugral Smackgirl Lightweight (106 lbs) title. Hisae would lose by armbar in the 1st round. She would then win 3 straight including a TKO win over former Valkyrie and JEWELS matchmaker Yasuko Mogi. This set up the rematch with still undefeated Shinashi for the DEEP Lightweight Title. This time Hisae would dominate the striking and KO Shinashi to hand her the 1st loss of her career and to win the title. She next took on Korean prospect and kickboxer Seo Hee Ham in a non title bout, dropping a decision. She won her next fight by armbar, this set up a title defense against rising superstar Miku Matsumoto. She lost her title in a close fight but was effectively outstruck and outgrappled to lose a majority decision.

Hisae would announce her retirement from MMA after submitting her opponent at DEEP 33rd Impact. After a year she faced Megumi Fujii in Shoot Boxing and announced plans to return to MMA at JEWELS 6th Ring. However, she suffered a broken foot in training and was not able to compete. She made her JEWELS debut in an exhibition match against Naoko Omuro at Jewels: 22nd Ring for Omuro's retirement fight. For now it seems she will stay retired from MMA.

In addition to MMA Hisae is a succesful kickboxer with a record of 8-3-1. She has fought notables in Shoot Boxing such as Fujii and legend Rena Kubota. She was a former contender for the WPMF Japan Women’s Mini Flyweight Championship in kickboxing against Little Tiger, the bout ended in a split draw.

Since retiring Hisae has also ventured to acting appearing in the martial arts-themed movie High Kick Girl! which was filmed with real fighting scenes and did not use any stunt actors.