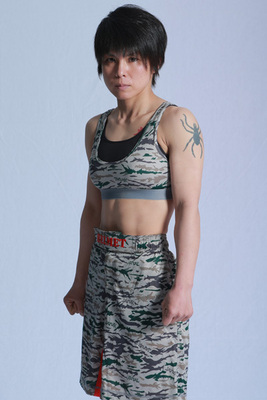 Naho Sugiyama is ineligible for regional rankings due to inactivity.
Fighters must have at least one completed MMA bout in the past two years to be ranked.

Sugiyama is an atomweight fighter under the DEEP JEWELS banner, having also fought for Invicta, JEWELS,  and Valkyrie. She didn't have a martial arts background before entering MMA and originally only took it up as a hobby after watching Japanese legend Caol Uno on TV during the K-1 World Max 2005 Tournament. She was the first Featherweight (106 lbs) Queen of JEWELS, 2011 Featherweight Queen Grand Prix champion, and fought for Invicta's inaugural Atomweight title. She holds notable victories over Yasuko Tamada (twice), Misaki Takimoto (twice), and Kikuyo Ishikawa.