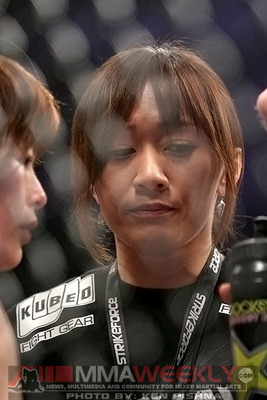 Megumi Fujii is ineligible for regional rankings due to inactivity.
Fighters must have at least one completed MMA bout in the past two years to be ranked.

Okayama Prefecture-born Megumi "Mega Megu" Fujii is one of female MMA's elite combatants, and easily its most skilled and effective submission fighter. Fujii, a Judo practitioner from the age of three and a Brazilian Jiu-Jitsu black belt, debuted at 2004's Smackgirl competition, where she won by submission, and over the course of the next six years, steadily built the single most impressive fight record of any top level female mixed martial artist. By Fall of 2010, Fujii's record stood at 22-0, with 18 of those wins coming by way of submission. Fujii won some renown for her Inazuma Toe-Hold submission, dubbed the 'Megulock,' but in fact won the majority of her eighteen submissions by way of armlock (12) or via choke (3).

Fujii's first setback as a professional mixed martial artist came at Bellator 34, which played host to the finals of Bellator's season-long women's 115 pound title single-elimination tournament, where she was bested by "The Warrior Princess" Zoila Frausto in a five round split decision. Fujii's undefeated streak prior to the loss stood at just shy of six years.

Fujii, who has routinely been outsized by her competition throughout much of her fighting career, relies on quickness and an extremely high technical skill level to defeat her opponents. She is compact and strong, with literally an entire lifetime of grappling and throws apparent in her efficient movement and tightly-wound physique. She continues to fight and train out of Tokyo, Japan's prestigious Abe Ani Combat Club, home to former UFC Heavyweight Champion Josh Barnett as well as a stable of other female fighting veterans of the Smackgirl promotion, none of them more proclaimed than Fujii herself.