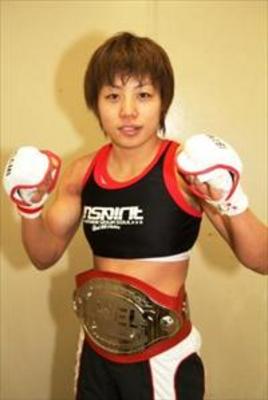 Fighting for a major organization has made Ayaka Hamasaki ineligible for regional rankings.

Hamasaki is a Straw weight fighter and is a 2nd dan black belt in Judo. She trains at Abe Ani Combat Club which is one of Japan's top gyms. She gets training from the likes of Hiroyuki Abe, Josh Barnett, Antonio Carvalho, and Megumi Fujii. She has fought in Jewels, Shooto, and Invicta FC. She has beaten notable opponents in Seo Hee Ham, Mizuki Inoue, Yuka Tsuji, Sakura Nomura, Lacey Schuckman and Emi Fujino.

Hamasaki won her career debut by armbar in the Shooto organization. She then entered the 2010 Jewels Lightweight (115 pounds) Queen Tournament. She won the opening round by keylock less than a minute into the fight. She next took a decision victory in the semifinals over Sakura Nomura. In the final she defeated kickboxer Seo Hee Ham by decision to win the tournament and the Jewels Lightweight (115 pounds) Queen title. She has since successfully defended her title 3 times against Seo Hee Ham, Yuka Tsuji, and Emi Fujino. Hamasaki is the current Lightweight Queen title holder.

Hamasaki fought against Lacy Schuckman at Invicta FC 2. She won by armbar with :15 to go in the fight. Hamasaki was expected to fight Carla Esparza for the inaugural Invicta FC Straw weight title at Invicta 4. She pulled out of the bout however to defend her Jewels title. The fight is now scheduled to happen at Invicta FC 6.

Hamasaki also holds a perfect 8-0 record in Submission grappling. She participated in a 1 night Jewels grappling mini tournament at Jewels 10th Ring. She won the tournament by submitting Emi Tomimatsu and Yuko Oya by armbar. At Jewels 14th Ring she defeated Saori Ishioka in a grappling rules match by decision.