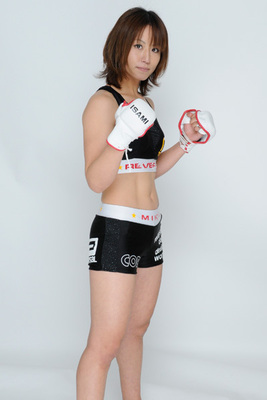 Mika Nagano is ineligible for regional rankings due to inactivity.
Fighters must have at least one completed MMA bout in the past two years to be ranked.

Nagano is a Strawweight fighter (often the weight class is called Lightweight in Japan). She has fought in JEWELS and Smackgirl. Her background is wrestling. In high school she was 2nd in all of Japan and in university she finished fourth in the 55 kg division of the 2002 Japan Queen's Cup. She has fought notable opponents in Megumi Fujii, Saori Ishioka, Seo Hee Ham, Mei Yamaguchi and Emi Fujino.

Nagano's career got off to a rough start when she was submitted by submission ace Megumi Fujii. She would enter JEWELS' 2009 54 kg Rough Stone Grand Prix which she won by defeating Rina Tomita and Yoko Kagoshima, both by submission. After a few fights Nagano entered JEWELS' 2010 Lightweight (115 pounds) Queen Tournament. She defeated Celine Haga in the opening round but fell to Seo Hee Ham in the Semifinals.

Nagano defeated Emi Tomimatsu at JEWELS 23rd Ring by unanimous decision. She defeated Takumi Umehara via 1st round submission at JEWELS: 24th Ring. Nagano was one of Jewel's biggest stars with a 12-6 record in the promotion. She fought in Jewel's first and last shows and 18 of their 26 events.

Nagano fought at the debut of DEEP JEWELS winning by armbar in the 1st round. She is scheduled to take part in DEEP JEWELS' Lightweight (114 lbs) tournament. She will fight Emi Tomimatsu in a rematch in the opening round at DEEP JEWELS 2.