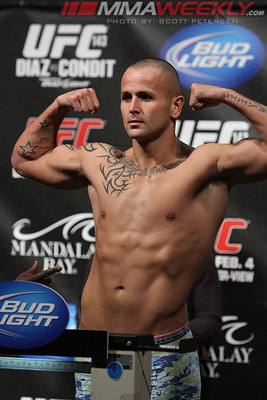 Michael Kuiper is ineligible for regional rankings due to inactivity.
Fighters must have at least one completed MMA bout in the past two years to be ranked.

Michael Kuiper holds a black belt in Judo as well as a purple belt in Brazilian Jiu Jitsu. Kuiper trains at Combat Sports Academy in Holland along side UFC fighter Amir Sadollah. Kuiper made his mma debut in 2009 and quickly had a 7-0 record that year as well as winning a title fight for Strength and Honor 5. After amassing an 11-0 record the UFC took notice.

Kuiper made his UFC debut at UFC 143 against Rafael Natal, a fight he would lose by Unanimous Decision. He would bounce back with a TKO finish over Jared Hamman at UFC 150. After having four successive fights fall through due to injuries by his opponents, he would eventually face Tom Lawlor at UFC on Fuel TV 9. He would be finished for the first time in his career, losing by submission in the second round. He would next take on Bradley Scott at UFC Fight Night 30, but again lose by submission, marking the first two fight skid of his career.