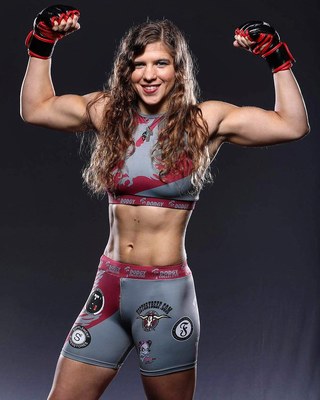 Fighting for a major organization has made Miranda Maverick ineligible for regional rankings.

Miranda Maverick (born July 1, 1997) is an American mixed martial artist and used to compete in Flyweight division of the Invicta Fighting Championships (Invicta). On June 2020 Miranda was signed with the UFC in the flyweight division. She is managed and represented by Brian Butler-Au. Maverick was born in Jefferson City, Missouri, United States. She started out training in jiu-jitsu when she was sixteen after encouragement by her father while watching Ronda Rousey fight on the television. She later joined the wrestling team at her high school her senior year and competed on the men's varsity team until discovering that she would not be going to college for wrestling. She then stopped to focus on BJJ. Turning 18 soon after she graduated high school, she decided to set her sights on MMA. Maverick started her amateur career in 2015, fighting under Kansas City Fighting Alliance, ShoFight, and The Blue Corner promotions. She amassed a record of 7-1, winning the Blue Corner and Shofight flyweight championships all while 18 years old, being listed as the number one amateur woman in her region on Tapology at the time she went pro. After her final ammy win, she was soon contacted by President Shannon Knapp of Invicta Fighting Championships.
Maverick made her promotional debut on November 18, 2016 at Invicta FC 20: Evinger vs. Kunitskaya against Samantha Diaz. Samantha Diaz cut off her hair the day of weight-ins to make weight and Maverick came in over 2 pounds above the strawweight limit. Maverick won the fight via rear naked choke in round one. Her next pro fight was on March 25, 2017 at Invicta FC 22: Evinger vs. Kunitskaya II facing Kalyn Schwartz. On the weight-in Maverick missed weight by 4.5 Ibs over the upper limit of 116 Ibs. She won the fight via submission on round one. On July 15, 2017, Maverick faced Gabby Romero at Invicta FC 24: Dudieva vs. Borella. She won the fight via unanimous decision. Her next fight came on July 21, 2018, facing Brogan Walker-Sanchez at Invicta FC 30. She won the fight via unanimous decision. She lost the fight via unanimous decision. Maverick faced Victoria Leonardo on September 1, 2018 at Invicta FC 31: Jandiroba vs. Morandin. She defeated Leonardo via a submission. At Invicta 34 in February 2019, Maverick lost a unanimous decision to DeAnna Bennett. In September, Maverick entered the Invicta Phoenix Series flyweight tournament with a chance to reestablish herself in the flyweight division. In the first round of the tournament, consisting of one 5-minute round, she defeated Victoria Leonardo via striking and clinch in a rematch via unanimous decision. Her second round match (also one 5-minute round) ended with Maverick submitting Shanna Young via rear naked choke. Maverick won the tournament by defeating DeAnna Bennett in a rematch by third round neck crank submission in the finals. Maverick defeated Pearl Gonzalez at Invicta FC 39 on February 7, 2020.
Maverick was expected to make her promotional debut against Mara Romero Borella on June 27, 2020 at UFC on ESPN: Poirier vs. Hooker. However, Maverick was forced to pull out due to injury.
Maverick studied at Drury University in Springfield, Missouri, majoring in psychology and sociology. Maverick is currently a student at Old Dominion studying Industrial Psychology.