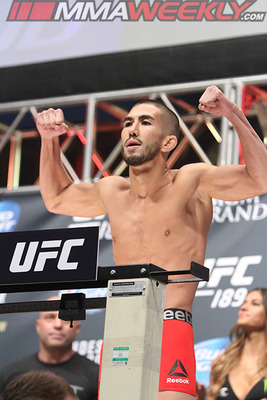 Fighting for a major organization has made Louis Smolka ineligible for regional rankings.

Louis Smolka is an American flyweight fighter currently signed to the UFC. He is a brown belt in Judo and a junior brown belt in Kenpo Karate. He trains out of 808 Fight Team in Kapolei, Hawaii. He has previously fought for Destiny MMA, King of the Cage, and Pacific Xtreme Combat where he was the flyweight champion. Of his seven professional wins, six have been finishes including four submissions.

Smolka began his amateur career in 2010 and was able to achieve a 3-1 record in his first year of competition. He would take nearly a year off before turning professional in 2012. He would pick up wins under the Destiny MMA and KOTC banners before moving on to the more prestigious PXC promotion in late 2012. He would win all four fights he had with PXC and would leave the promotion as the flyweight champion.

In late 2013, Louis was signed by the UFC. He was slated to make his promotional debut against Alp Ozkilic at UFC Fight Night 35 and was able to come out with a unanimous decision victory.

In his next bout Smolka was put against flyweight stand-out Chris Cariaso, he put up a great fight against the considerably more experienced fighter in Cariaso but in the end came up short losing a Split Decision. He is set to fight Richie Vaculik at UFC Fight Night 55: Rockhold vs Bisping on November 7th,2014 in Australia.