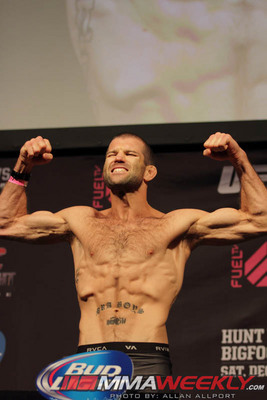 Richie Vaculik is ineligible for regional rankings due to inactivity.
Fighters must have at least one completed MMA bout in the past two years to be ranked.

Richie Vaculik is an Australian flyweight fighter currently signed to the UFC. He is a purple belt in Brazilian Jiu Jitsu and trains out of Sydney, Australia. He was a cast member of The Ultimate Fighter: Smashes. Of his nine career wins, all have been finishes including six submissions.

Vaculik would begin his professional career in 2006, but would only compete twice, winning both, until 2009. He returned to action and was able to compile another pair of victories, including a rematch of his debut fight. He would lose his first fight to Shooto and One FC veteran Gustavo Falciroli in early 2010. He would go on to win five more fights over the next two years while fighting as high as 145 pounds.

In 2012, Richie was selected to be a part of Team Australia on The Ultimate Fighter: The Smashes which featured a team of British fighters against a team of Australians. Although he was a naturally smaller fighter, he entered the show in the lightweight category. He would lose his first fight in the house to eventual winner, Norman Parke, by unanimous decision. Although he was eliminated from the tournament, he was brought back as a replacement when another fighter was injured. He would lose again, this time by submission to finalist Colin Fletcher.

After his stint with TUF was over, Vaculik took a fifteen month leave from the sport. He was called on to fight promotional new comer, Justin Scoggins, when the UFC returned to Australia for UFC Fight Night 33. This was his debut at flyweight, but the American would get the better of the fight. Richie would lose via TKO at the end of the first round, marking the first time that he had been finished in a professional fight. He will look to get his first UFC win at UFC Fight Night 43 against Roldan Sangcha-an.

*Episode 12 Colin Fletcher def. Vaculik by Submission (Elbow Injury) at 1:27 in Round 2