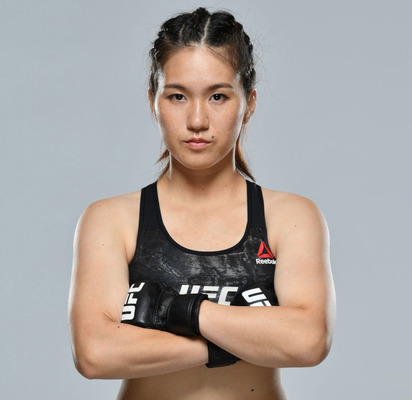 Fighting for a major organization has made Mizuki Inoue ineligible for regional rankings.

Inoue is a Straw weight fighter with a background in Karate and Kickboxing. She has thus far fought her entire MMA career under the JEWELS banner. She holds notable wins over Alex Chambers, Bec Rawlings, and Emi Fujino.

At 16 years old Inoue made her professional MMA debut, participating in JEWELS 2010 56 kg Rough Stone Grand Prix. She won the tournament by submitting Emi Murata and Asako Saioka, both by armbar. Inoue then fought JEWELS champion Ayaka Hamasaki in a non title bout. She lost by decision.

Inoue made her US debut at Invicta 6 where she defeated Bec Rawlings by decision.

Mizuki made her return in the newly formed DEEP JEWELS banner and entered their Lightweight (114 lbs) tourney to crown the inaugural champion. She defeated Emi Fujino by decision to advance to the finals against Emi Tomimatsu. Mizuki missed weight for this fight and was penalized 2 yellow cards making it impossible for her to be the winner, if she did win it would be ruled a DQ loss. Inoue subbed Tomimatsu in the 3rd round but due to these conditions she received a loss.

Inoue also has successful careers in Kickboxing and Shoot Boxing with 4-1 records in both. She won the 2012 Girls S-Cup 53.5 kg Tournament to become the first Shoot Boxing Girls S-Cup 53.5 kg champion. In Kickboxing she reached the finals of the J-Girls Bantamweight Tournament where she lost to Yukino Oishi. Inoue also has a 1-0 record in Submission Grappling.