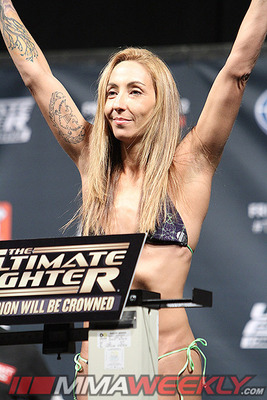 Heather Clark is ineligible for regional rankings due to inactivity.
Fighters must have at least one completed MMA bout in the past two years to be ranked.

Heather Jo Clark was born in Los Angeles, California, USA; on 19 September, 1980. She began her combat training at the late age of 28, first joining a chute box gym in LA. Clark then began doing kickboxing as well, but mainly to stay active. Clark was approached by the head coach of the gym to give MMA a try.

Soon after Clark moved to Albuquerque, New Mexico, to train at Jackson's MMA. During this time Clark fought for regional promotions and Xtreme Fighting Championships; amassing a record of 5-3, with all 5 victories coming from finishes.

Clark signed with Bellator in 2013 and made her promotion debut against now fellow UFC fighter, Felice Herrig, at Bellator 94. In a back-and-forth battle that went to the judges scorecard, Clark lost via split decision. Clark would late meet Herrig again in the cage during TUF 20 and would lose by decision.

Clark would fight once more with XFC, before signing with the UFC to appear on The Ultimate Fighter 20 - the first all female season of the show. Clark was Team Melendez's sixth pick and was ranked 11th.

It was around this time too that Clark moved to Las Vegas to train at Xtreme Couture.