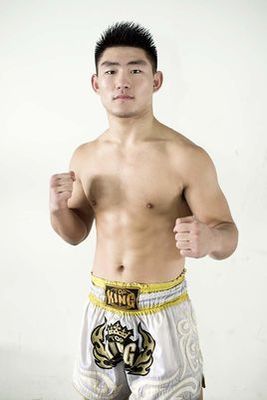 Fighting for a major organization has made Yadong Song ineligible for regional rankings.

Song Yadong (born December 2, 1997) is a Chinese mixed martial artist who competes as a Bantamweight for the Ultimate Fighting Championship. As of May 11, 2020, he is #14 in the UFC bantamweight rankings.
At the age of 10, Song was initially sent to the city Dengfeng by his mother, to study the martial art Wushu. Song went on to win a gold medal at the Hebei Sanshou Championships at 60 kg; at the age of 12, Song discovered the martial art Sanda and later went to study Sanda at the School of Songjiang Wu. However, Song later went to the Beijing Aohalin Fight Club to start training in Mixed Martial Arts under Ao Hailin. Song made his professional debut in 2013, where he has fought in promotions such as Kunlun Fight and One Fighting Championship.
In November 2017, it was announced that Song Yadong would step in on short notice, to fight the first ever Indian-born fighter in the UFC and fellow debutante, Bharat Kandare at UFC Fight Night: Bisping vs. Gastelum in Shanghai, China. Song's UFC debut took place on the 25th November, 2017. Song landed fast counter punches, combinations and some heavy leg kicks, but at the end of the fourth minute, Song landed a right hand that knocked Khandare down, causing Khandare to reach for Song's legs to try and get a takedown; however, it was not a good attempt and Song was easily able to secure a front choke, giving Song his first UFC win and his third win by submission.
In Song's second UFC fight, he faced Brazilian jiu-jitsu practitioner and Muay Thai fighter, Felipe Arantes on June 23, 2018 at UFC Fight Night: Cowboy vs. Edwards in Singapore. After a strong first round, with Song landing quick counter punches and securing top control after catching an Arantes' kick, the second round saw much of the same, except Arantes shot for a double-leg which ultimately resulted in Song easily shucking it off with Arantes, again, landing on his back with Song attempting an arm-triangle choke. However, with exactly a minute left in the second round, Arantes was able to force a stand up and returned to his feet. With 10 seconds remaining in the round, Arantes was being pushed against the fence and what was looking like another round being won by Song; Song landed a hard elbow, which forced Arantes to crumple onto his knees that forced the referee to jump in and end the fight, declaring Song the victor by way of technical knockout at 4:59 of the second round. With this win, Song received the Performance of the Night bonus which earned him an extra $50,000
Song was expected to face Frankie Saenz on 24 November 2018 at UFC Fight Night 141. However, it was reported on November 7, 2018 that he pulled out of the event due to injury and he was replaced by newcomer Vince Morales. He won the fight via unanimous decision.
Song was scheduled to face Alejandro Pérez on March 2, 2019 at UFC 235. However, it was reported on January 11, 2019 that he pulled out due to an undisclosed reason. He was replaced by Cody Stamann. The bout with Pérez was rescheduled and eventually took place on July 6, 2019 at UFC 239. Song won the fight via knockout in the first round. This win earned him the Performance of the Night award.
Song faced Cody Stamann on December 7, 2019 at UFC on ESPN 7. After three round fight, the fight ended with a majority draw.
Song faced Marlon Vera in a featherweight bout on May 16, 2020 at UFC on ESPN: Overeem vs. Harris. He won the fight via unanimous decision. Both participants earned the Fight of the Night award.