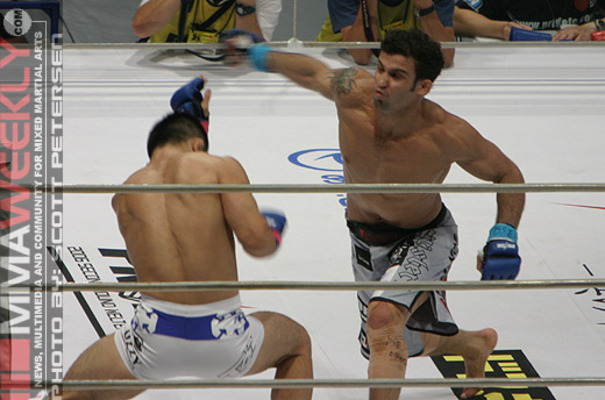 Cristiano Marcello is ineligible for regional rankings due to inactivity.
Fighters must have at least one completed MMA bout in the past two years to be ranked.

One of the unsung heroes behind many Brazilian MMA legends, Christiano Marcello has spent his career as a part time fighter and full time Brazilian Jiu Jitsu coach at Chute Boxe Academy. He currently fights for the UFC and has his own gym called CM Systems. His numerous pupils include Anderson Silva, Wanderlei Silva, Murilo Ninja Rua, Mauricio Shogun, Jose Pele Landi-Jons, Andre Dida, Nilson de Castrou, Cris Cyborg, and Evangelista Santos among many others.

Marcello was born in Rio de Janeiro and grew up in a dangerous neighborhood. He enrolled in the Gracie academy in 1989 in order to learn to defend himself. By 1995, he was offered a chance to come to the US in order to train with Rickson Gracie. He stayed there and trained until he returned to Brazil in 1998 for Vale Tudo competition.  After he returned, he received his black belt under Royler Gracie. In 2001, he was invited to join the famous Chute Boxe Academy as a grappling coach. He stayed with the academy for 8 years and helped to train many well known Mixed Martial Artists.

One of the incidents he is most known for is a confrontation in 2005 backstage at a Pride event. Charles "Crazy Horse" Bennett was speaking ill of Wanderlei Silva and the Chute Boxe academy. A fight ensued and in the end, Marcello had locked in a triangle choke and choked Bennett unconscious.

Marcello's first major bout outside Brazil was in Pride Bushido 12 in 2006 which he lost via decision. In 2009, he left Chute Boxe amicably and started his own gym named CM Systems. He still trains many Chute Boxe fighters out of his gym. He is currently a 4th degree black belt.

His next major MMA opportunity came in 2012 when he was given a spot on The Ultimate Fighter Live He won his fight to make it into the house but lost and was eliminated. He also lost his first official fight in the UFC at The Ultimate fighter Live Finale against Sam Sicilia. He was next scheduled to fight Reza Madadi at UFC 153 where he won via controversial split decision. Marcello's next fight came at UFC on Fuel TV 8 against Japanese fighter Kazuki Tokudome, but he would lose a unanimous decision. He would take on fellow TUF Live castmate, Joe Proctor, at UFC Fight Night 36 in Brazil, but would again drop a decision. This marked the first two fight losing streak of his career and put his UFC record at 1-3.

Episode 1 Marcello def. Jared Carlsten by Rear Naked Choke at 2:43 of Round 1

Episode 3 Justin Lawrence def. Marcello by KO (Punches) at 3:15 of Round 2