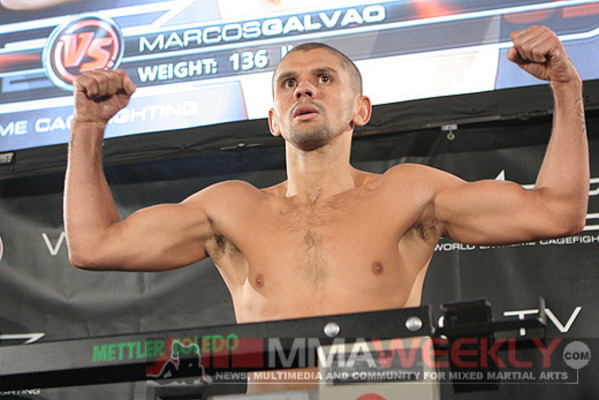 Marcos Galvão is ineligible for regional rankings due to inactivity.
Fighters must have at least one completed MMA bout in the past two years to be ranked.

Marcos Galvao is a brazilian jiu jitsu black belt under Nova Uniao founder Andre Pederneiras. Galvao is a 5 time Brazilian National Champion as well as a 2 time World Champion in jiu jitsu. Galvao fought for the WEC as well as Shooto before finding his home with Bellator. He would fight in the Season 5 Bantamweight tournament he would advance from the first round with a Unanimous Decision over Chase Beebe before losing to Alexis Vila by Split Decision in the semi-finals.

Galvao would next enter the Season 6 Bantamweight tournament and would defeat Luis Nogueira in the finals to earn himself a title shot against his friend Eduardo Dantas (the two train together at Nova União) at Bellator 89. Coming in as a slight underdog (+185) Galvão was defeat by Dantas via knock out in the second round.

Video of Marcos Galvao training as he prepares for Ring of Combat in 2010. By Amilcar Navarro.