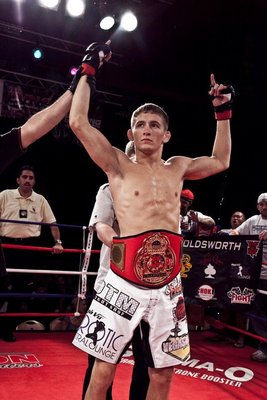 Chris Holdsworth is ineligible for regional rankings due to inactivity.
Fighters must have at least one completed MMA bout in the past two years to be ranked.

Chris Holdsworth was a contestant on TUF 18.  He faced Louis Fisette to see who moved on to the house.  Holdsworth and Fisette had a very exciting fight that Chris ultimately won by submission.  In episode 3 of TUF Chris had been picked to fight Ronda Rousey's top male pick Chris Beal.  Holdsworth ended up dominating the fight against injured Beal and won by 1st round submission.

On Episode 10 of TUF 18 Chris faced Michael Wooten. Holdsworth took the fight to the ground in the first minute and attempted several submissions, finally finishing with a rear-naked choke from standing back mount. He moved on to the finals with the win, where he would face David Grant and come out on top with a submission victory in the second round to win the Ultimate Fighter as well as Submission of the Night.  Holdsworth's first fight since winning TUF 18 was against Chico Camus at UFC 173, winning by unanimous decision the same night his teammate T.J. Dillashaw captured the bantamweight title in the main event.

Episode 1 Holdsworth def. Louis Fisette by Submission (arm triangle) at 4:09 of Round 1

Episode 3 Holdsworth def. Chris Beal by Submission (guillotine) at 4:16 of Round 1

The Ultimate Fighter 18 Finale Holdsworth def. David Grant by Submission (rear-naked choke) at 2:10 of Round 2