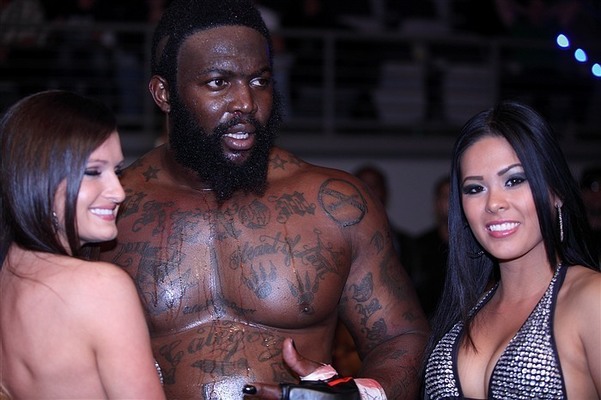 Dada 5000 is ineligible for regional rankings due to inactivity.
Fighters must have at least one completed MMA bout in the past two years to be ranked.

Dhafir Harris, better known as "Dada 5000" is one of the figureheads of South Miami's backyard fighting scene.  These illegal, unsanctioned fights were the subject of 2015 film: Dawg Fight.

A frequent body-guard to Kimbo Slice, Dada also participated in the backyard fights that made Kimbo famous.  According to Dada, Kimbo and company declined to release these videos, and a rift formed between the fighters.

After severing ties with Kimbo, Dada continues to promote his own brand of backyard mma: "Back Yard Brawl Extreme Fighting Series". These fights can often be found on YouTube, and occasionally are available via Pay-Per-View.

After several years of dispute between the two, Dada would finally get the chance to fight Kimbo Slice in the co-main event of Bellator 149.  The fight would not be pretty, as both fighters would get gassed very early on after both fighters tried to end the fight early by landing a one punch knockout.  In the end, Dada 5000 would end up being the one getting KOed by Slice in Round 3 after getting hit on the chin and then collapsing.  It would be later revealed that Dada had went into cardiac arrest after getting KOed by Slice. The fight result would later get overturned to a no contest, however, as Kimbo Slice would pop positive for banned substances in a pre-fight drug test.