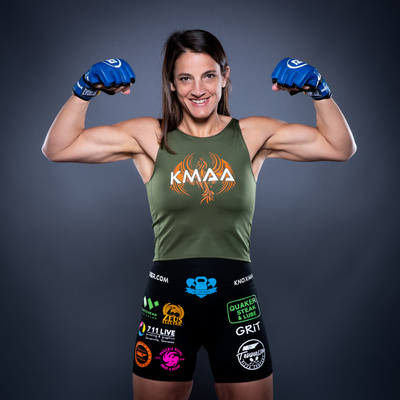 Parker has a pro record of 4-2, and compiled a dominant 5-0 record as an amateur, before turning pro in early 2019. She is a veteran of both Invicta FC and Bellator.

Parkers most recent victory came on January 10th, 2020 at Valor Fighting Challenge 68 in Knoxville, Tennessee. The win garnered her second "of the night" award, as she was honored with "Submission of the Night" for her slick finish by way of Reverse Triangle. Her previous "of the night" award came in her pro debut, where she won "Fight of the Night". Parker was also awarded as Valor Fighting Challenge's 2019 "Fighter of the year".

Liv is part of one of the largest, if not the largest stable of female MMA fighters in in the southeast region, as Knoxville Martial Arts Academy (KMAA) boasts 11 current and active female competitors including veterans of Invicta FC, Bellator, UFC, King of the Cage, LFA and more. KMAA is also the home of UFC light heavyweight contender Ovince Saint Preux.

Of her nine wins, five have come by way of TKO, three have been by submission, and one was a Unanimous Decision bout.

For more information on Olivia "Liv" Parker or KMAA, you can visit her website at www.livparker.com