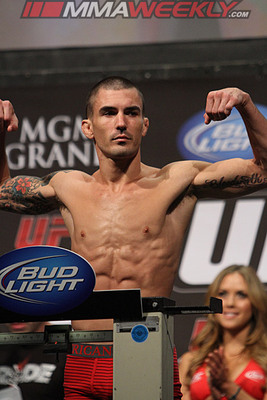 Byron Bloodworth is ineligible for regional rankings due to inactivity.
Fighters must have at least one completed MMA bout in the past two years to be ranked.

Byron Bloodworth is a Bantamweight fighter training out of Iron Clutch Fitness in Atlanta, Georgia. Before making his UFC debut, he had 7 fights on the southeast circuit and won six of them. When he made his UFC debut, he also made his Bantamweight debut, having previously fought at featherweight. He took the fight on short notice but was unable to make weight, coming in three pounds over the 135 pound weight limit.

His UFC debut fight was against the also debuting Mike Easton. Bloodworth took the fight on short notice, replacing an injured Jeff Hougland. Throughout the fight, neither fighter landed many strikes although the moved at a frenetic pace. In the second round, Easton was able to land a couple knees to the body and head of Bloodworth to end the fight. He was next set to face John Albert at The Ultimate Fighter: Live Finale, but had to pull out. He fought Erik Perez, who took his place in the Albert fight, at UFC 155. Bloodworth went into the fight after a nearly fifteen month layoff but was unable to come away with a win. He lost via TKO in the first round to Perez who came into the fight on a seven fight win streak.