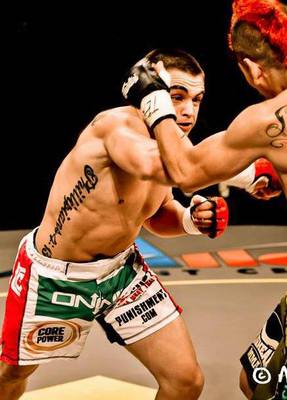 Fighting for a major organization has made Ryan Benoit ineligible for regional rankings.

Ryan Benoit is an American flyweight fighter currently signed to the UFC. He started wrestling at age 10 and boxing, kickboxing and Jiu-Jitsu at age 16. When he finished high school, Ryan was a three time Texas state high school wrestling champion. He holds a notable win over UFC veteran Joseph Sandoval. Ryan has finished all seven of his wins including six T/KOs. He has won the "Fight of the Night" bonus one time.

Benoit began his amateur career in 2009 with a submission victory. Before the year was over, he would be a 2-0 professional fighter. He experienced his first loss in 2010, but would bounce back with four straight wins in the next two years. Of those four wins, three of them were for Legacy FC including a first round knockout of UFC veteran, Joseph Sandoval. After his win over Sandoval, Benoit expressed his plans to move down to flyweight stating, “I’d like to start making my drop to 125 pounds. I’ve seen these guys at 135 and they’re just huge and even though I look muscular and stuff, they are a little bit bigger than me. I think if I can make the weight, I can be a force at 125 for sure.” He would lose another decision in 2013, but would begin his drop to flyweight with a 130 catchweight fight at Legacy FC 24 with another first round knockout.

Ryan was signed by the UFC in late 2013. He made his flyweight debut against fellow promotional debuter, Josh Sampo, at The Ultimate Fighter 18 Finale. His opponent missed weight, coming in at 127.5 pounds so he was awarded five percent of his purse. In a close back and forth fight, Benoit would be finished for the first time, tapping to a rear naked choke near the end of the second round. Their fight was awarded "Fight of the Night" honors and since his opponent was ineligible for the bonus due to his weight miss, he was awarded both of their bonus checks, totaling $100,000.

Benoit would bounce back from the loss with a TKO finish of Sergio Pettis at UFC 185.