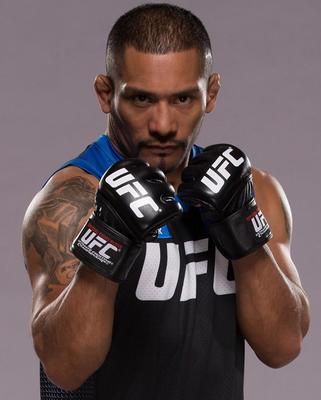 Fredy Serrano is ineligible for regional rankings due to inactivity.
Fighters must have at least one completed MMA bout in the past two years to be ranked.

Fredy Serrano is a wrestler and was a member of the 2008 Columbian Olympic Freestyle Wrestling team where he competed at the Beijing games.  He ended up losing to Abbas Dabbaghi from Iran in the Round of 16. Serrano began wrestling in 1990 at the age of 11 competing in many tournaments over the years, now considered one of the pioneers for Olympic Wrestling in Columbia.In 2007 he became the Pan Am bronze medalist at 55kg and is 13 time Colombian national champion. He holds the rank of blue belt in Brazilian Jiu Jitsu.

Serrano was initially schooled in wrestling at "Club Victoria" in one of the dangerous areas/barrios of south Bogota, a famous school for developing young wrestlers including Andres Taborda, Nelson Garcia, and Junior World Champion ; Sandra Roe.

Serrano created a small training room in his garage to teach his son Maicol wrestling, as soon as he was old enough. After word spread, more and more locals and kids began to train at his garage, in 2008 he officially founded the "Club Equipe Serrano".  Now, "CES" has moved to a rented property and has become renowned in Colombia for being a quality wrestling club, and is considered among the most premier MMA training gyms in the nation. He also serves as a head coach at his original gym "Victoria wrestling club".

At the beginning of 2013, Serrano retired from wrestling to focus on his MMA career. He has had two unsanctioned MMA fights in 2013, both of which he won.

In March 2014, Serrano was announced as having signed an 8-fight contract with Resurrection Fighting Alliance. However, he never debuted before joining the cast of The Ultimate Fighter.

He would join Team Werdum on The Ultimate Fighter but would lose his first fight however it did turn out to be the Fight of the Season.

Facing his former TUF teammate - Bentley Syler at UFC Fight Night 62: Maia vs. LaFlare. Serrano started off his UFC career in excellent fashion. After an exciting two rounds, with both fighters clearly taking a round each, Serrano was able to keep the decision from the judges when he landed an uppercut that dropped Syler. Referee Osiris Maia quickly calls the fight at 1:34. For his excellent showing Serrano was awarded a Performance of the Night bonus.