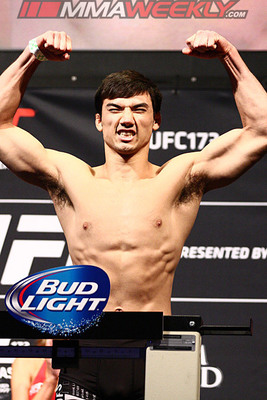 Fighting for a major organization has made Aaron Phillips ineligible for regional rankings.

Aaron "The Dragon" Phillips is currently a member of the UFC's Bantamweight Roster.
Aaron Phillips started off his career training under UFC veteran Tim Credeur at Gladiators Academy in Louisiana along with guys like Dustin Poirier. He would make his pro debut in 2011 against Eric Acuna. He would go 7-0 before getting signed to the UFC. At the time, he was known as "The Model". His UFC debut would come against Sam Sicilia at UFC 173 in 2014 where he would lose by unanimous decision. His next fight came later that year at UFC Fight Night 49 against Matt Hobar where he would lose by unanimous decision. He would get released from the UFC after this. Phillips (7-2) would fight Chris Gutierrez (6-0-1) where he injured his leg and lost the fight. In his time off from his injury, Phillips would open up his own gym (Headkicks MMA) where he trains many more upcoming fighters and teaches kids jiu-jitsu and kickboxing along with training himself. Phillips would make adjustments that put him on a 5 fight win streak after nearly retiring. In 2020, Phillips would get a call from the UFC while teaching a jiu-jitsu class to take a short notice UFC fight. He would go from "The Model", to "The Dragon". Aaron Phillips (12-3, 0-2 UFC) took the fight against undefeated prospect Jack Shore (12-0, 1-0 UFC). He would lose the fight by second round submission. He had fights scheduled against Adrian Yanez, Cameron Else, Kris Moutinho, and Jonathan Martinez. Unfortunately they all fell through. Aaron Phillips (12-4, 0-3 UFC) is still under contract with the UFC and is still searching for his first win in the worlds biggest MMA organization.