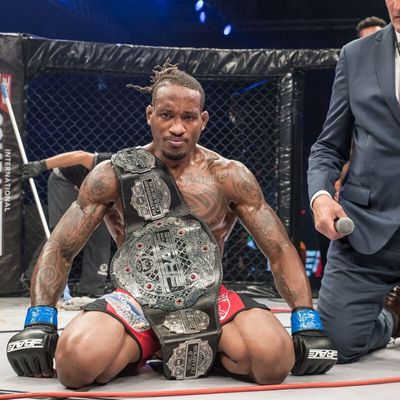 Fighting for a major organization has made Bubba Jenkins ineligible for regional rankings.

Bubba Jenkins (born February 5, 1988) is an American mixed martial artist and former collegiate wrestler. He grew up in Virginia Beach, Virginia and is well known for winning the 2011 NCAA Division I Championship at 157 lbs. for Arizona State University. Jenkins currently fights for the mixed martial arts promotion Bellator Fighting Championships in the Lightweight division, after signing a long-term promotional agreement with the organization in May 2013. Bubba Jenkins is active on Fighttips, a web series created by Shane Fazen.

Jenkins wrestled for Cox High School and graduated from First Colonial High School. Jenkins was a four-time letter-man, one-time Virginia state champion and six-time high school national champion. After high school, Jenkins joined the Penn State Nittany Lions wrestling squad for the 2006-2007 season. Jenkins wrestled for Penn State for four years before academic restrictions kept Jenkins from wrestling his senior year. Jenkins moved to Arizona State University for his senior year (2010-2011 season). It was at ASU where Jenkins won the 2011 NCAA Division I Championship at 157 lbs. Bubba Jenkins was also a freestyle Junior World Champion. He still amassed a total win record of 96 matches in his storied collegiate career at Penn State and Arizona State, two of the most historic programs in wrestling.

Bubba "The Unicorn Slayer" Jenkins made his mixed martial arts debut in the Lightweight division on December 2, 2011 at Tachi Palace Fights 11: Redemption. Jenkins defeated Josh Williams by submission via strikes at 2:04 in the first round. Jenkins returned for his second fight at Tachi Palace Fights 12: Second Coming on March 9, 2012. He defeated Chris Gomez by submission via Rear Naked Choke at 2:07 in the first round.

On June 30, 2012, Jenkins made his promotional debut for the RFA against highly decorated amateur boxer Jesus Adame at RFA 3 - Stevenson vs. Cochrane. Jenkins quickly slammed Adame to the ground and submitted him via Rear Naked Choke at 1:08 of the first round.

On October 31, 2012, it was announced that Jenkins joined Jon Jones' coaching staff on the seventeenth season of the UFC produced reality television show The Ultimate Fighter.

On May 31, 2013, Bellator MMA announced they had signed Jenkins to a long term promotional agreement and he will make his debut in the summer.

Jenkins took on Mike Barreras at Bellator 97. He won the fight via TKO in the second round.

Jenkins returned to the Bellator cage at Bellator 100 against LaRue Burley on September 20, 2013. He suffered the first defeat of his professional MMA career as he was stopped by Burley via strikes in the third round.

The following November, Jenkins would defeat Ian Rammel due to strikes in the third round at Bellator 109.

On July 25, 2014, Jenkins faced Poppies Martinez at Bellator 122. Jenkins defeated Martinez via strikes at 4:10 in the first round.

Jenkins faced Thiago Meller at Bellator 126 on September 26, 2014 in Phoenix, Arizona. He won the fight via unanimous decision.

After moving from the Bellator Lightweight division to Featherweight, Jenkins faced former WSOF Featherweight Champion Georgi Karakhanyan on January 16, 2015 at Bellator 132. He lost the fight via technical submission in the first round.

Jenkins faced Jordan Parsons on November 20, 2015 at Bellator 146. He won the fight via split decision.