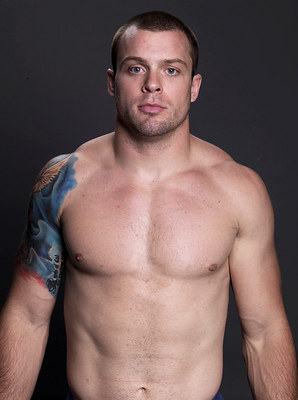 Sean O'Connell is ineligible for regional rankings due to inactivity.
Fighters must have at least one completed MMA bout in the past two years to be ranked.

Sean O'Connell debuted in April 2007 with no prior fight training of any kind aside from attending a few cardio kickboxing classes.  He won his first two fights by KO in 0:36 & 0:37 seconds and his third fight by TKO in 1:24.  3 fights later and only 7 months into his MMA career, he was 5-1 and the Heavyweight Champion of Ultimate Combat Experience in his native Salt Lake City.

At this point in his career, he finally decided to join a gym and train.  He got a sponsor to pay for his training at Jeremy Horn's Elite Performance.  He won one of his next two fights giving him a 6-2 record in under a year as a pro MMA fighter and under 6 months after joining an MMA gym and training.  One of the fighters at his gym, Nick Rossborough, had just been on The Ultimate Fighter 7 and was still in contact with the producers so upon hearing TUF 8 would have Light-Heavyweights he put in a good word for O'Connell.  Sean sent the producers a highlight reel of his fights, flew out to Boston to interview, and was selected.
Filming for TUF 8 started just 13 months after his pro debut and 6 months after joining a gym.  There were 32 participants fighting to get into the house, though O'Connell had never fought above 225 he only had one pro fight at Light-Heavyweight.  He faced Shane Primm to get into the house and lost via Rear Naked Choke at 3:40 of the 1st round.  With that, in May of 2008, his first experience with the UFC was over.

The former high-school wrestler and collegiate football player realized he'd only been in the sport for a year but it's hard not to go into TUF thinking you'll win and he took it especially hard that he didn't make it into the house.  He spent the next 3 1/2 years getting a basic education in all aspects of MMA, occasionally training at other gyms for brief periods like Matt Hughes' HIT Squad in Illinois to make him more well-rounded.  After going 6-2 and appearing on TUF in his first 13 months, he went 4-2 over the next 3 1/2 years fighting for Jeremy Horn's Elite Fight Night, World Championship Full Contact, United Fighting Organization, ZarMMA, and Fight King bringing his pro record to 10-4.

He found his footing in the sport in 2012 & 2013 going 4-0 for Showdown Fights in Utah bringing his record to 14-4 and beating the likes of former UFC vet Marvin Eastman and future Bellator fighter Trevor Carlson.  Showdown Fights is one of the largest promotions in Utah and also was in syndication nationally through FOX Sports giving him the spotlight to shine and he won each fight against a higher level of competition than he'd faced with previous promotions but he showed he wasn't the same fighter he was a few years back.  His 5 fight winning streak caught the eye of the MFC matchmaker out of Edmonton, Alberta, Canada.  O'Connell agreed to fight on their January 17, 2014 card MFC 39 where he beat Markhaile Wedderburn by Rear Naked Choke in just 1:48 of the very first round.  This extended his winning streak to 6 and pro MMA record to 15-4 with 7 wins coming by (T)KO and 3 by Submission.  Of his 4 losses 2 had come via (T)KO and 2 via Submission.  In fights that went to a decision he stands an unblemished 5-0.  All 5 of his fights ending in Submission (3 wins, 2 losses) all were by Rear Naked Choke.

Riding a 6 fight winning streak and with the last 5 in Showdown Fights/MFC, Sean had caught the eye of UFC matchmaker Joe Silva and when Steve Bosse pulled out of his Ultimate Fighter Nations fight on April 16, 2014 in Quebec City, Quebec with 4 weeks until the fight, Silva called O'Connell in mid-March knowing he'd just fought in Canada 2 months prior and offered him the spot against Ryan Jimmo (Another TUF 8 Light-Heavyweight who didn't make it in the house).  Now a few months shy of 6 years later they were set to fight on a UFC card!  Sean and Ryan got along fine as was evidenced by their light-hearted staredown after weigh-ins where they intertwined their arms and simultaneously took drinks from their post-weigh-in drinks.  Unfortunately for Sean, he was KO'd at 4:27 of the 1st round, earning Jimmo a Performance of the Night bonus award.

Joe Silva always remembers when a fighter fills in on short notice and O'Connell's phone rang less than 2 months after the first call.  This time he was needed on 5 weeks notice filling in for the injured Anthony Perosh, June 28th, 2014 against fellow striker Gian Villante in Auckland, New Zealand for Ultimate Fight Night 43: Te Huna vs. Marquardt.  With an extra week to prepare, he's hoping it makes the difference and earns him a win and a scheduled UFC fight instead of another fill-in.  But you won't hear him complain, it's been over 6 years since his brief stint on TUF 8 and he's just happy to be back in the UFC at now 15-5 where he feels he belongs.  He's only 30, is at the highest level he's ever been trained for an MMA fight, and he feels he has a lot of fight in him for the Light-Heavyweights in the UFC starting with Villante now that he has his "official" Octagon debut finally under his belt.