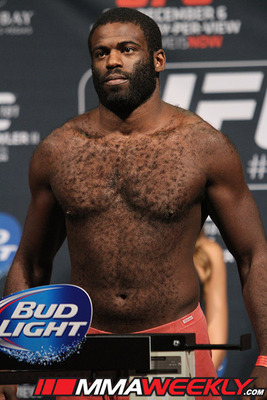 Justin Jones is ineligible for regional rankings due to inactivity.
Fighters must have at least one completed MMA bout in the past two years to be ranked.

Justin Jones was born in San Diego, California, USA, in 1987. Jones began kickboxing at his local church during his Senior Year of High School to make money. It wasn't until he went to San Diego State University; where he graduated with a Criminal Justice Degree, that he started getting serious about fighting. This is when he began his BJJ training.

He fought at the amateur level 4 times, everyone a victory, which included 3 finishes. Jones made his professional debut on 18 January, 2014 with the regional promotion - Gladiator Challenge. He faced Cordell Williams, who he defeated via KO early in Round 2.

Jones got his big break when both Gian Villante and Jonathan Wilson, dropped out of their bout with Corey Anderson due to injuries.

On 6 December, 2014 - less than a year after making his pro debut, Jones faced TUF 19 winner Corey Anderson at UFC 181. Jones suffered his first defeat against Jones via Unanimous Decision..