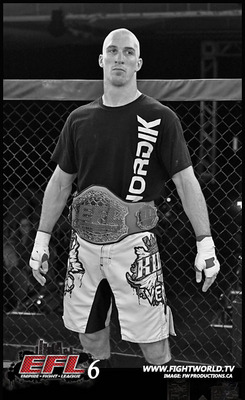 Jonathan Meunier is ineligible for regional rankings due to inactivity.
Fighters must have at least one completed MMA bout in the past two years to be ranked.

Jonathan Meunier made the transition from amateur kickboxing to amateur MMA at the end of 2011. After only a couple months of MMA training, he fought his first MMA bout and lost by submission in the third round against Kevin Lampron. He then won his next 7 ghts, including 6 by KO or TKO.

Jonathan “Distict” Meunier is known for being involved in controversial fights.

On May 5th 2012 against Domenic Ruccolo, he landed a kick to the body of his downed opponent, an illegal technique in amateur MMA in the Province of Quebec, although the referee didn’t do anything about it.

In his next fight, Ian Perron landed a spinning back fist on Meunier, another illegal technique. After his second round TKO victory, Meunier verbally insulted Perron’s cornermans.

On August 25th 2012, Meunier fought Vincent Houle in the Ring Extreme 23 main event. At the beginning of the third round, Meunier quickly rushed on Houle and immediately landed a 2 punches combination while Houle was looking to touch gloves. Although Meunier never intended to touch gloves, many people felt it was a cheap shot.

On September 29th 2012, during the first round of an amateur kickboxing match, one of Meunier’s cornerman jumped in the ring and took off Meunier’s head gear and left the building. The fight was resumed once they found another helmet for Meunier.

On December 15th 2012, he fought David Perron in Quebec City. Early in the first round, the referee stopped the fight while Meunier was punching a defenseless Perron on the ground. The referee then asked Perron if he was alright and gave him some time to recover and the fight continued in the confusion. Jonathan Meunier dominated the rest of the fight and ultimately won by TKO early in the second round.

On September 29th 2012, Jonathan Meunier defended his BFL middleweight amateur kickboxing title against Kevin Généreux via TKO in the 4th round due to a foot injury.