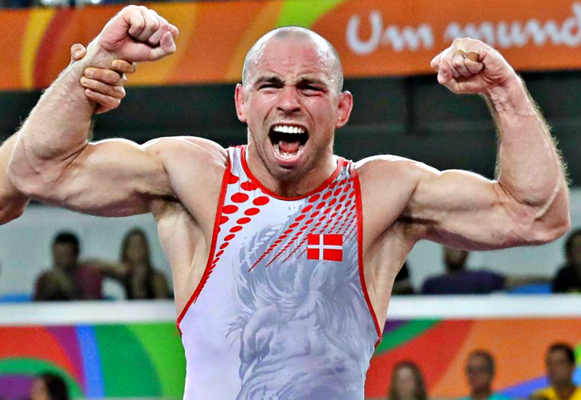 Fighting for a major organization has made Mark Madsen ineligible for regional rankings.

Mark Overgaard Madsen has a background in Greco-Roman Wrestling. Hailing from Nykøbing Falster in Denmark he is a five-time World Greco-Roman championship medalist, a 2016 Olympic Games silver medalist, and was also winner of the bronze at the 2014 Greco European Championships. He has achieved a long list of regional and national podium finishes, to earn his place as Denmarks greatest ever wrestler so far, and probably their greatest combative athlete in terms of accolades.

Madsen made his olympic debut at the 2008 Summer Olympics in Beijing, where he lost to Russia's Varteres Samurgashev in the first preliminary round of men's Greco-Roman 74 kg, with a technical score of 1–7.

At the 2012 Summer Olympics in London, England, Madsen was defeated by another Russian wrestler Roman Vlasov, in the second round of themen's Greco-Roman 74 kg category. Because his opponent advanced further until the final round, Madsen qualified for the repechage bout, where he scored four points and defeated France's Christophe Guénot. In the bronze medal match, Madsen was unable to score enough points in the first two periods, and lost to Lithuania's Aleksandr Kazakevič, finishing only in fifth position.

A few months after the games, Madsen had signed a contract with 'European MMA' competing in 2 fights for the promotion.

At the 2016 Olympic Games in Rio , Madsen reached his career zenith to capture silver at 74kg. Receiving a BYE for the opening round, he went on to defeat Iran's former world champion Saeid Abdevali in the round of 16, then Serbia's top prospect Viktor Nemeš in the quarters, and finally Hungary's former world champion Peter Bacsí in the semi's to secure a guaranteed medal.

He would lose out on gold to Russia's Roman Vlasov after a highly competitive and entertaining bout. This final, a rematch of Vlasov vs Madsen at the 2015 Greco World's, where Madsen also lost out narrowly to a common foe in Vlasov.

His result at the 2016 Olympic games caps a remarkable career securing his place in the history books after countless battles in pursuit of reaching the Olympic podium.

As well as a sport career, Mark balances time as a business student, father, and coach for his Greco-Roman club of 'Brydeklubben Thor' and the Danish Wrestling association. He has continued to wrestle competitivly post-2016 for the Wrestling club of 'ASV Mainz 88' who fight in the German Wrestling-Bundesliga ( 1st / A-Division ).