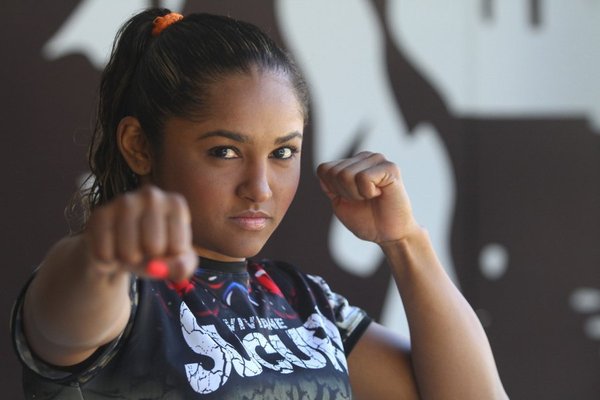 Viviane Pereira is ineligible for regional rankings due to inactivity.
Fighters must have at least one completed MMA bout in the past two years to be ranked.

Born and raised in Fortaleza, Brazil, Viviane trains at Dragon Kombat and has a impressive record of 12 wins and no losses in professional MMA.

In her MMA debut, she faced brazilian veteran Rosy Duarte and won by a controversial split decision. But she became known in MMA after a TKO win over former boxing champion Duda Yankovich and a unanimous decision victory over future XFC champ Poliana Botelho. After a 6-0 record, Viviane signed XFC to fight on a Women's Strawweight Tournament. Her debut was against Fernanda Barros in the XFCi 7, and she won by 1st round KO, advancing to the semifinals. In the XFCi 9, she defetead the unbeaten prospect Liana Pirosin by unanimous decision, advancing to the tournament finals.

In XFCi 10, Viviane fought against Finland's Vuokko Katainen in the tournament finals. After a very controversial fight, ''Sucuri'' won by unanimous decision, causing a lot of bad comments by the media about her performance and the judges decision.After winning the Strawweight Tournament, Sucuri was scheduled to face Vanessa Guimarães for the XFC World Strawweight Title in the XFCi 12. In very tough fight with a lot of overturns, Viviane submited Vanessa with an armbar, becoming the first Strawweight champion in XFC history.Nine months later Viviane defeated Carolina Karasek under the Aspera banner.

Viviane has recently (September '16) signed to fight in the UFC.