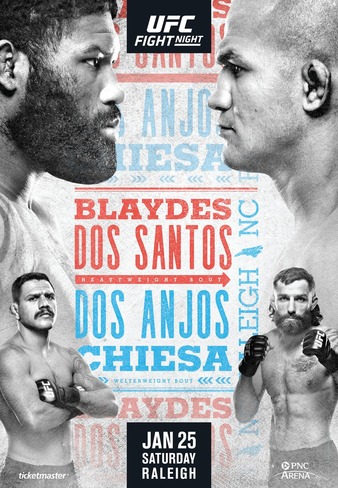 There's no way one could ever say there was no value in Roxanne, you must either be ignorant or another losing gambler.
Also, Chiesa is 5 inches taller and RDA tends to lose to tall grapplers.


RDA is his toughest test but also his shortest test.

Only impressive things RDA has done since 2015 is beat pettis, submit a tired Kevin Lee debuting at 170, and not getting finished by edwards ....
Since 2015, Chiesa took Trinaldo's bombs and submitted Dariush/Miller and had a 15 minute battle w/ a mentally insane person in his last fight.

LOL says the guy betting on +600 fighters. There was no indication that fight was going to go how it did based on the performances of either girl against previous competition, or  based on their respective stats. Barber suffered a massive injury and we don't know how that affected her.

If you say you suspected that fight would play out how it did, you're full of ****. It's that simple. You're like a guy who won the lottery telling people he knew what  numbers would be drawn. I bet not one you  reeeeing ******* weebs put serious money on Roxy. Prob 10-20$ bets.

Oh--and if reach and height was the determining factor in fights then Struve would be master of the ******* universe. 'butmer reach!

Michael Chiesa has never beaten anyone in the top 5. He has been obliterated effortlessly by every elite fighter he has ever fought. If he does finish, it's by sub--and RDA has never been subbed. Kevin lee couldn't do it and he is a far, far better prospect than Chiesa is or ever will be. Miller, Dariush, Condit and Diego are not significant wins. Not significant enough for me, or indeed anyone with any modicum of betting intelligence, to wager money on him. It's just that simple.

He might win, but if he does, it won't be sub, and it definitely won't be by KO/TKO because he couldn't punch his way out a spider's web. It will be because he lands slightly more pitter-patter, or thigh-****s his way to a boring ass cage grind UD. Or a combo of both.

And I do not even believe he's capable of that.

Lol Pettis and Lee beat Chiesa. RDA also beat better versions of both of them. Chiesa hasn't done **** at 170 he doesn't even deserve this fight. How does beating a washed Condit and Sanchez get you a top 5 opponent ? You say RDA hasn't done much lately but Chiesa has done even less. The only way RDA loses this is if he has severely declined, if even the one that lost to Edwards last fight shows up this is an easy night for him.

"Duck, I want to sleep with my wife tonight,"

You're right I believed barber woulda tko'd her but I told every single guy that made fun of Roxanne that she was an amazing bet. only imbeciles would take Barber at those odds. She was never a figher I told people " oh yea she's got that no problem".
My brother was adamant Modafferi would win, I enticed it because she was bigger,more experienced, hasn't been finished in a while, fought better females who can actually fight w/ higher ranks.
I thought it was ******* gangster she came out as Majin Vegeta at the weigh ins, just that made me wanna throw nice money on her.
I figured barber's youth athleticism and rawness would offset moddaferi's tactical fighting...or it would be the reason she would lose like Antonina did.

Plus, Barber got bullied by Aldrich who was also making her debut at 125.....also the same reason I chose Mazo over her
Aldrich lost a fight she was completely winning to a girl smaller and younger than Mazo.

Who has RDA beat recently that makes him relevant?  His only purpose in this division is to be used as a rug. They feed him to top contenders because he was a former champ. He always puts a tough fight but he's completely undersized. The only tall guys he beat are weak fighters (Cerrrone and Magny) and Lee woulda won if it was a 3 round fight. If RDA wins, i'll give him props,  but they're trying to put other people in his place.

come on fish, don't bring Struve into the picture.
If you were damn near 7 foot, do you think you could fight swift like a normal person? a heavy bag to him is a mini bag, imagine how hard it was to find sparring partners for that guy. I assume that's why he took on Jiu jitsu, so he can fight small and close because he's too awkwardly big.
None of us could know how long it took that guy to get authentic combat training and finally learn to fight to like a giant. he probably still hasn't lol
I understand where you're getting at though fish, chiesa fights like he's grabbing fish out of water and kicks like hes trying to show off how long his legs are, but I don't think there is anything special about RDA at this point in his career other than his power and ruggedness. The only thing chiesa has going for him is that there's 3 blueprints to beat RDA (usman,covington,edwards) and them NC folk love that wrestling ****.

I will say that RDA is a pro and always seems to work the body. When I consider the height difference here, in a strange way I almost give RDA advantage cause he hammers the midsection. I have no idea, it seems like its going to decision, drama

The Gravely/Johns line is interesting.

It seems like a majority of peeps are on Johns (we will see how that holds up tomorrow when more people jump in) and Pinnacle has it now down to Gravely -111. Im guessing that tomorrow line will pass and Johns will be small fave, that would be  fade indicator if I ever saw one

Johns first 3 wins in UFC are hardly impressive, the submission on Soto was cool, but random, he was outclassed in his last 2 fights. Dude has fought 4 times since 2017, Gravely has fought 13 times. I played that worker at -105.

having 2nd thoughts about my chiesa dec pick

@Noksu
same, he might submit the mean muggin' garden gnome

Allen vs. Lentz
Arnold Allen, DEC
This should be called the goofy looking bastards fight.


"“This is Prize-Fighting, IDGAF about your family or your problems” - MassaBruce"

"Keep your eyes open. Or you'll die in the dark."