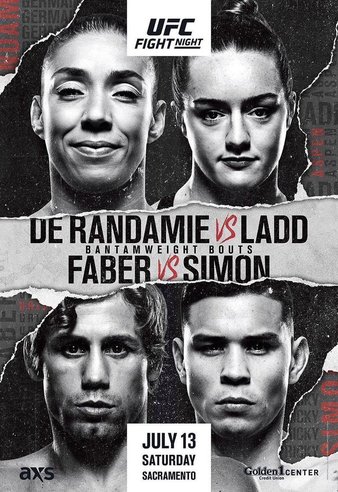 Been looking forward to Nico's return for forever. Tough fight.

Emmett vs. Bektić Changed from Rumored to Confirmed

Fili vs. Moraes
Andre Fili, DEC
no body can take this away from us! #cut4bieber #emogang

*** I thought Faber was coming back to give McGregor an easy winnable big fight. The even got beef from the ultimate fighter show.

Well, Aspen, it's been nice knowing you...

Ladd vs. de Randamie
Germaine de Randamie, TKO, R4
I like Ladd but I feel de Randamie can avoid the takedown and light Aspen ass up! Now it's a different story if the fight hits the ground, basically Ladd will smash GDR on the ground and get a GNP TKO or pass to an easy submission. Thing is I don't think she'll get the takedown as she doesn't have great footwork to close distance and her stand up is robotic. GDR has excellent footwork and good technical striking. Enough to avoid takedowns pick her apart along with a build up of damage as the fight goes on, maybe enough to get a late TKO or just cruise to a decision.

Faber vs. Simón
Urijah Faber, SUB, R1
I don't know what it is but I see Ole Bumchin coming back and choking Ricky Bobby and that magnificent mullet of his out!

Wonder why ESPN doesn't have this event on their schedule yet

Faber vs. Simón
Urijah Faber, SUB, R2
Urijah Faber will get picked apart on the feet and then will get a RNC in the second round.

Elkins vs. Hall
Ryan Hall, SUB, R1
I think Hall will mess around on the feet and take the fight to the ground and armbar Elkins.

Why is Ladd vs GDR the main event? would much rather Emmett vs Bektic as main event or faber vs simon

@NokSuk I think the UFC has high expectations for Aspen Ladd. They probably hope she can destroy GDR and maybe that will help her become a new star.

Calvillo vs. Souza Changed from Confirmed to Cancelled

I knew the UFC would steal Brianna van Buren from Invicta before she got to defend her title.

UFC steals invicta champs right away! Drives me nuts but it has too happen. Wonder how much invicta pays?

Roberson vs. Phillips Changed from Confirmed to Cancelled

McMann vs. Montaño Changed from Confirmed to Cancelled

Lopez vs. Day Changed from Confirmed to Cancelled

Villante vs. Rodriguez Changed from Confirmed to Cancelled

What are the odds that Aspen can manage to take GDR down? I cant remember what her take down defense is like. In Aspens last fight she didnt really impress me on the feet. So I dont know who to pick. lol

The way I see it is either Ladd takes her down and gets a GNP Tko within the first half of the fight or GDR lights her up in gets a Tko inside of 3 rounds. They both have clear advantages over each other. I think Ladd may have struggled a bit because her opponent Eubanks is pretty solid. Overall a tough card for picks. I could easily see 2/3 of the card going either way.

@superstar, your'e right and the lines back you up, a lot of close fights. gonna take some good old fashioned luck and a crystal ball for this card.

"death created time so it could grow the things it would take."

Absolutely no idea how the main plays out. I've taken Ladd because I think GDR is kind of half in, half out of MMA.

I cannot fathom why Bektic is so heavily picked in this one. This is a fight tailor made for Emett to win by KO. Anyone who wants to stand and bang with Emmett is probably going to have a very bad night, especially someone with the wide guard and willingness to try and punch through damage as Bektic. This will be a standup affair that may not make it out of the first 2 minutes of the first. A true slobberknocker.

See above. Why in the name of God Vetorri is such a massive favorite on Tap boggles the mind. I'm not saying He's bad, but styles make fights, and I fully expect mutante to smack the bejeesus out of him here. I think people are reading too much into the fact he went to decision with Adesanya. Israel doesn't do well when he's crowded and faced with a guy with a solid chin. This is parlty why I think Whittaker is going to destroy him, but that's another discussion. Mutante hits hard. Like, really, really hard. Much harder than Adesanya who is much classier, but doesn't have one-punch KO power. Mutante dropped a fight to a great wrestler with great cardio and heavy hands in Heinisch. Won't happen here.

Although he could win this by KO/TKO. I like Beniel but his last two wins have been shaky, and he's starting to show his age and shopwear. Drakkar is good, people. Apart from that fight a couple ago he's looked stellar. The fact that he's a dog here is basically madness and I'm considering dropping something on him pronto, because I can't see him remaining at his current value for long.

Full disclosure; I deeply despise Pena, who is a horrible ***** and a used tampon of a human being in general. Surely she has got to be the most entitled,unsporting, easily detestable female fighter in the history of WMMA. She is, excuse me, an awful **** of a thing and I'd hoped she'd gone away forever after Val embarrassed the **** out of her by beating her at her best strength effortlessly. But here we are. Anyway, she hasn't fought in two years, and if Monatno can keep off her back and put her on hers,she can win a decision here. Montano does suck balls though, and may very well get subbed within one round. This is much more likely.

Man, Shelby and Dana must really hate captain skate park arsechin to give him this fight, which is completely unwinnable for him. I'm really high on simon; his chain wrestling, pace, TDD and speed is off the hook. There is absolutely no way on God's green earth he drops this one; faber will get beaten up horribly, and possibly even finished. Surest pick of the card (90% confidence).

Another surprise Tap favorite. I'm going to be either be in the top 5% or the bottom 5% this card, seriously. Ok, here's the thing; Fili isn't good. His best win is Bermudez who could fit in his top pocket, and beyond that, a decision over jury who has been carbon dated to the ming dynasty. Yes, Moraes has losses--to killers. Here's something else; Moraes hits like a bus, and if he goes in to this fight showing zero respect for touchy's fancy spinny pattycake ballet, he is literally just going to smash him to pieces. That's IF he doesn't show Fili any respect. If he does, he'll drop the decision. And that's because Fili can't handle big punchers. See the Kattar fight.

Dariush vs. Klose Changed from Confirmed to Cancelled

dariush injured and out, klose looking for new opponent

"death created time so it could grow the things it would take."

I really wanted to see that fight, any ideas who jumps in against Klose?

No word yet shat, but the good news is, it happened early in the week. They'll dredge up someone.

Dredge being the important word there lol