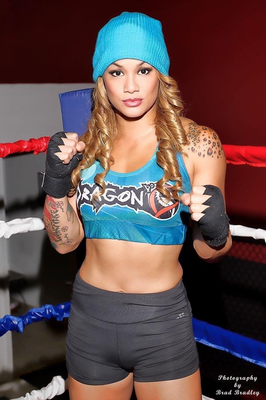 Born in California Andy moved to South Carolina in her teens. She was first exposed to MMA working as a ring girl at local events. Eventually she decided she was more interested in fighting than watching so she traded in the ring card for a pair of gloves. The majority of her amateur career was spent competing in the east coast region. Early on she had no management and bounced around from gym to gym taking any fight offered. Most of her losses were to much bigger girls as much as 3 weight classes out of her natural weight class which is due in large part to the upside down record she accumulated as an Ammy.  In 2014 Andy decided that she really wanted to get serious about MMA and make it her life.  With much thought she decided she needed real management and high level training so she decided to uproot her life and move a thousand miles south to Bossier City, Louisiana to join forces with Donny Aaron & Andrea KGB Lee at Karate Mafia/ Relson Gracie Brazilian Jiu Jitsu. With this move proving immediately to be the right decision her career was reinvented.  With fast improvement in both her striking and ground game she and her team decided that Andy should make her pro career in the Atomweight division. Andy Debuted on Aug 15 2015 vs Corrie Ward at a 110 catch weight. She brought down the house in a fight of the night performance scoring a 3rd rd KO over ward. She immediately gained attention from UFC vet "Crazy" Tim Credur who bolstered her as an Invicta FC prospect. Her stunning model looks and physique combined with her high energy level inside the cage make her a marketing dream.  Andy Continues to improve daily and is following in the footsteps of her assistant coach and training partner, KGB Lee. She is a hungry fighter who is determined to stay active and fight as often as possible.  No doubt the sky is the limit for this Atomweight contender. On April 9, 2016 Andy became the inaugural King Of The Cage Atomweight World Champion by defeating Elane Santiago via viscous G&P ref stoppage in what was a performance of the night.