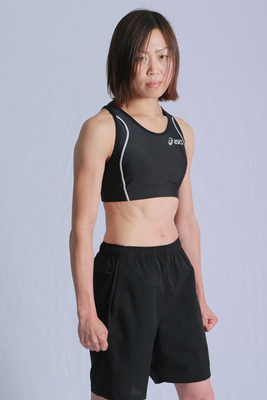 Haga is a Norwegian of Korean ethnicity currently fighting in the Atomweight weightclass. She has fought predominantly for the JEWELS and DEEP JEWELS promotion but has also fought in ROAD FC. She holds notable wins over Naho Sugiyama and Mika Nagano. She used to train with former DREAM Lightweight champion Joachim Hansen, and also at Abe Ani Combat Club when she was in Japan. She now trains at Jackson's MMA.

Haga's road to MMA was a bit unusual as she got into MMA with very little martial arts or sports background having only done a year of martial arts training, a year of track & field, and a year of strength training. She got interested in MMA after using money she won playing poker (she was a professional poker player) to take a trip to Japan. It was then that she met and befriended Megumi Fujii while training at AACC.

Haga's career got off to a very rocky start losing her first four fights in JEWELS. Haga credits much of her early career struggles to overestimating her opponents and underestimating herself. For her next fight she knew that she had to do something big if she wanted to remain in the promotion so she asked to fight JEWELS poster girl Mika Nagano. In a massive upset she defeated Nagano via decision. This allowed Haga to enter the JEWELS Lightweight Grand Prix 2010 to crown the first Lightweight (115 lbs) champion and was immediately rematched with Nagano. This time she would fall to Nagano by armbar. Haga fought another JEWELS star her next fight in Saori Ishioka, she dropped a very close decision. After losing 5 more straight, Haga dropped a weightclass.

Celine ended her 7 fight losing streak by submitting Anna Saito, she would win her next fight as well. This led to her being matched against then JEWELS Featherweight (105 lbs) champion Naho Sugiyama in a non title bout. Haga would once again shocked everyone with a massive upset handing Sugiyama just her 2nd career loss and was named MVP of the event.

Haga next signed with ROAD FC to face Smackgirl veteran Masako Yoshida in ROAD's first ever female bout. Haga would win by Rear Naked Choke to bring her win streak to 4.

Now she was set to face upcoming prospect "Manhoef" Suzumura in the debut event of the DEEP JEWELS merger. Haga would suffer a broken orbital in the 1st round but fought on to see a decision. This is where there is controversy, Manhoef had missed weight and therefore was to be handed two yellow cards making her at best being able to draw. However the cards weren't scored and Manhoef took the majority decision. This put Haga in a tough position as she needed the extra money to pay for emergency surgery on her orbital. Thanks to fan support she was able to raise enough money and underwent successful surgery.

In her first fight after the injury she won by a strange submission that seemed to be a cross between a gogoplata and an armbar. She then took on Kyra Batara, Haga threatened with many submissions early but as the fight went on Batara was able to dictate the fight with her wrestling. Haga would drop the decision. She picked up a quick submission win last month and looks to continue her remarkable career turnaround.

She is a big fan of Hip Hop and lists The Roots, Common, Mos Def, Army of the Pharaohs, EPMD, Gravediggaz, Immortal Technique, Chino XL, and Dilate Peoples as her favorites.