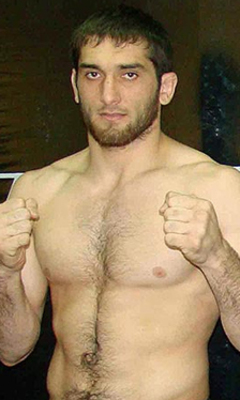 Adlan Amagov is ineligible for regional rankings due to inactivity.
Fighters must have at least one completed MMA bout in the past two years to be ranked.

Adlan Amagov comes from a fighting family as both his brothers Musa and Beslan also compete in MMA. Adlan won a silver medal in NAGA in 2011 and a gold medal in 2012. He made his MMA debut in in 2007 in Russia losing his first match but he would bounce back and have a 8-1-1 record before being signed to Strikeforce. He would win his first two fights before being TKO'd by Robbie Lawler. He would get one more win for the promotion over Keith Berry before it came to an end.

Amagov fought mostly at middleweight for his career but he is now set to make his welterweight debut for the UFC when he fights Chris Spang at UFC on Fuel TV 9.