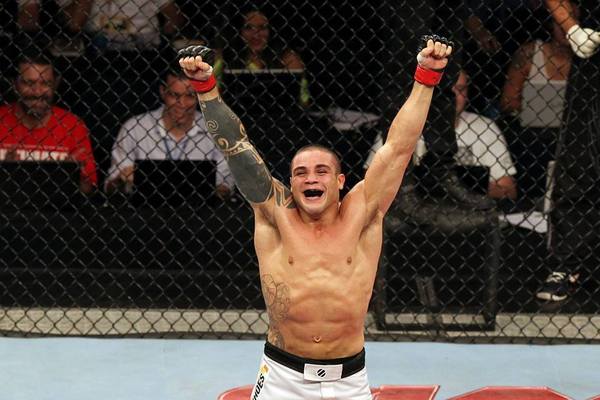 Daniel Sarafian is ineligible for regional rankings due to inactivity.
Fighters must have at least one completed MMA bout in the past two years to be ranked.

Sarafian started training martial arts at five years old under his grandfather who was a black belt in judo. Sarafian took solely judo classes until he was ten years old when he began training karate. At sixteen he began taking lessons in Brazilian jiu-jitsu. After entering high school and getting constantly picked on for being overweight, Sarafian began working out and training MMA. Only a couple classes into MMA, Sarafian "fell in love with fighting".

Sarafian made his professional debut at Predator FC 2 against Jorge Luis Bezerra, winning the fight via submission in round three. In his next bout, he agreed to fight UFC and Strikeforce veteran Mike Whitehead. Sarafian lost the fight via unanimous decision. After his bout with Whitehead Sarafian was asked to take a fight for District Combat Promotions, a small promotion based in the United States. Sarafian took the fight and won via submission (armbar) in the third round. Sarafian stayed in the United States and fought on the Texas' promotion, Xtreme Fight Championship. He fought Cedric Marks and won the fight via submission in the first round. Sarafian then signed a one-fight deal with Bellator Fighting Championships to compete on their first fight card of their inaugural season. Sarafian fought Gary Padilla, losing in the second round via referee stoppage.

His first fight for the UFC would be a Split Decision loss to CB Dolloway however he would earn Fight of the Night. He would follow the loss up with a first round submission of Eddie Mendez.