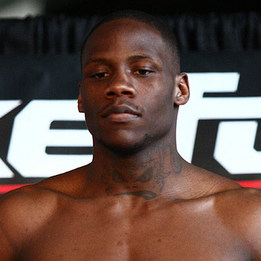 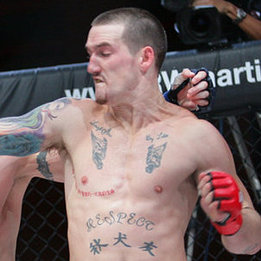 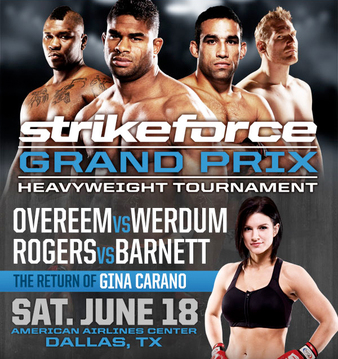 The second bout of Strikeforce: Overeem vs Werdum featured Joe Ray taking on Nah-shon "The Rock-n-Rolla" Burrell in a 180 pound catchweight contest.

Burrell started off landing a nice jab and Joe Ray looked to come back with a left hook. A low kick from Ray and then Burrell pressed forward looking for a takedown, landing a nice slam and quickly being pulled into Ray's guard. Ray had an active guard and it seemed as though Burrell was playing with fire on the ground, yet he continued to apply pressure and look for ground and pound. Ray worked to get a kimura from half-guard, transitioning to an armbar that Burrell slipped out of. Burrell maintained top control but was almost caught in an armbar. Burrell powered out and cracked Joe Ray with a pair of hammerfists. Up to standing and Ray secured a kimura in the clinch, nearly securing an elbow-bending armbar that Nah-shon Burrell miraculously defended and made it to the end of a wild first round.

Round two saw Ray hunting again for his left hook but Burrell seemed to know it was coming and landed low kicks and jabs. Burrell picked Ray apart over the next couple exchanges and changed levels perfectly to land a takedown. Into side control Burrell landed an elbow to the body and then a handful of solid punches to the face of Joe Ray. Ray got to his feet and almost had a takedown, but Burrell's balance kept him on top. Referee Don Turnage gave the pair little time to work and stood them up, leading to another Burrell takedown. Burrell didn't find himself in as many precarious positions in the second round, delivering good ground and pound throughout the round.

Nah-shon opened the third round with a solid combination and beat Joe Ray to the punch repeatedly. Ray looked gassed as he tried to keep his hands high, while Burrell still had good quickness as he landed a takedown. Ray wall-walked up to his feet and secured a guillotine as he was taken down again. Burrell popped his head out after a tense moment and landed a great pair of hammerfists on top. Burrell smothered Ray for the final seconds, stood up, and landed one more punch at the end.

The judges scored the bout unanimously in favor of the winner, Nah-shon Burrell, in an impressive performance upsetting the betting favorite in Joe Ray.