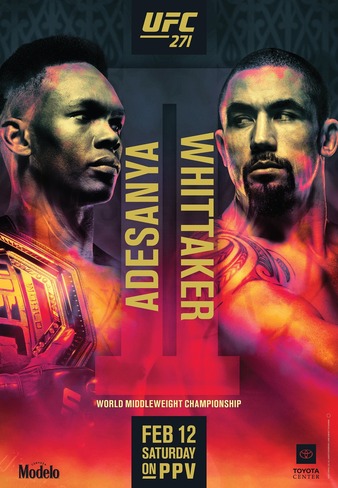 Adesanya vs. Whittaker II Changed from Confirmed to Rumored

"Be the reason someone smiles today. Or the reason they drink. Whatever works. "

Hernandez vs miocano is going to be sick

Adesanya vs. Whittaker II
Robert Whittaker, TKO, R3
Izzy got big headitus wonder if hell do a breakdown of himself getting kod?

Hard fight to see Rob Whitaker win, Watching Rob just get demolish like that. I rembeber thinking the first fight was  going to be close , but 30 second in to their fight,  I told my mate that Rob was going to get KO'd Soon as he left himself so open to get  KO and was so predicable spamming loopy left hooks

I honestly think this fight will be closer, But I think the same result,I can see this fight being a nail biter, I heard Rob was super pissed at Izzy for all the **** he talked, And that explane why he fought like that, Also Rob was super depressed at the time, Heard he better now. I'm expecting the best Bobby Knuckles in this fight

Meh first fight Rob was way off his game the only incorrect pick ive had on him and I've seen all his UFC fights.
I even picked wonderbread to beat him long before I was on here. "oh the sherdog days"
LOL umm supposedly I picked Cannonballer to beat him so guess thats 2 misses.
I really gotta stop taking so many blows to the head.

Rob better have a different game plan or he will get KOed the same way again.  I really want him to win, too.

I mean he can't have a worse one..

Hernandez vs. Moicano
Alexander Hernandez
Hernandez's ability with the grappling puts him a notch above in this bout.

Mathetha vs. Cosce
Orion Cosce
TAM will have Orion on point with the takedown game. I hope for a Blood Diamond victory though as an Izzy stan.

hahah Uncle Dana does not give a **** about Modafferi, retirement fight against Casey O'Neill here gonna end with easy money for me.

@axafin it's true. I feel like at this point Modafferi is basically the WMMA equivalent of the stunt rug in a shamwow commercial that has coco pops and human **** deliberately poured over it to demonstrate the amazing absorptive powers of the advertised product.

Out of all the jugheaded one-and-done jobbers the UFC has signed over from the embarrassment that is DWCS, the Cosce brothers are easily some of the worst fighters to ever be signed to the promotion. Just awful.

Aside from having dog**** resumes, including both of them having back to back wins over professional fight diver Daniel McWilliams, their fighting styles totally suck ass. It’s like they’re both genetically aligned to both look the same and be equally ****** fighters. Between the two, I think Orion is *slightly* better, but he suffers from the same weakness his brother does having absolutely zero head movement skills, weak gas tank, and generally no heart. The moment the gameplan begins to fall apart, they both curl in a ball and throw half hearted punches like an agitated toddler punching his dad’s thigh for taking away his game boy. His boxing has the grace and technical modesty of a constipated schizophrenic simultaneously enduring the world’s cruelist hangover. I said it once and I’ll say it again, this is why having an undefeated record is more of a detriment than a blessing, cause when you do eventually lose (and YOU WILL eventually lose, unless you’re Khabib) you’ll have no idea how to mentally recover. I know his brother has not recovered from that ass beating he took from a short notice no-name ethnically ambiguous bald **** named Sasha, I doubt Orion is feeling the same.

Honestly, I struggle to comprehend how exactly Mike is going to adapt his style into MMA. He’s pretty much the closest thing to legitimately effective Drunken Fist horse**** you see in Jackie Chan movies. Has me very curious, but simultaneously concerned. He has a great corner, but so did Carlos and his debut was a ******* embarrassment. Still, Mike is much more experienced than Carlos and has a lot of kickboxing accolades under his belt, which should be enough to stump Orion’s dumb ass.

It physically pains me to say this, but…Carlos *grits teeth* will probably win this…

I don’t like Carlos. The fight with Kennedy proved he’s an idiot in the ring, and his interviews proves he’s an idiot outside the ring. “Honestly, I’m fighting for wherever the money is” Ah, I see, maybe you should have gone to…I don’t know…any other ******* promotion? Not the one where several fighters have formed unions against them SPECIFICALLY because of poor pay? As much as he annoys me however, his striking might prove too much for Cherant IF he approaches the fight intelligently this time. *IF*.

Cherant might have the advantage on the ground, but his takedowns are poor and his striking is the martial arts equivalent of colon cancer. In fact, taking a **** ********** sounds more productive than elaborating on this bet any further. **** it, Carlos wins, I’m gonna give my hubby Davey Grant a call.

I hope the next 4 fights they announce are bangers. I like a lot of the fights already but this is pretty low name value for a ppv

Adesanya vs. Whittaker II Changed from Rumored to Confirmed

Heard that Colby v Khamzat happening on this but that’s more than likely just a rumor. Doubt it happens but we’ll see

unconfirmed source says Chimaev - Colby on this one

I doubt the fight happens tbh