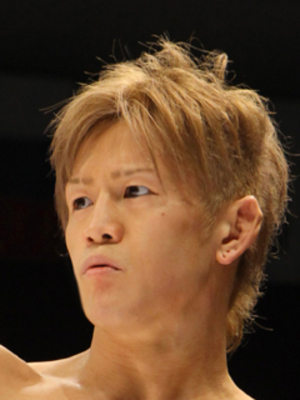 Riku Shibuya is ineligible for regional rankings due to inactivity.
Fighters must have at least one completed MMA bout in the past two years to be ranked.

Asuka "Riku Shibuya" Mikami is a Japanese mixed martial artist who currently competes as a flyweight. Born on 4 April 1985, Mikami hails from Tokyo, Japan, and is associated with the Wajutsu Keishu Hearts team. Mikami has fought principally for the RINGS organization, with stops at the Tokyo Tribe Fight, HEAT, and ONE Championship organizations as well.

Mikami made his debut at RINGS - The Outsider 3 on 19 October 2008, where he defeated Hiroki Nakamura via KO barely a minute into the opening round.

2010 would prove to be the best year of Mikami's career up to that point, as he would win all three of his fights that year. Mikami bested Hisashi Yamamoto via unanimous decision at RINGS - The Outsider 11 on 3 April 2010 before going on to win his second fight on the same night against Hiroaki Motegi. Mikami would win the bout via KO in the second round. Mikami closed out 2010 with a unanimous decision victory over Yuya Kaneuchi at GCM - Cage Force 20 on 28 November 2010.
Mikami would only fight once during 2011, picking up a win over Yuta Nakane via rear naked choke at RINGS - The Outsider 16 on 8 May 2011.

Mikami would continue to fight only once a year, earning a draw in his lone bout of 2012 against Takahiro Kuroishi at RINGS - The Outsider on the sixteenth of December.

"Riku Shibuya" would fight twice in 2013, picking up wins in both fights. He would first best Masamune Masamune via first round guillotine choke at RINGS - The Outsider 24 on 10 February. Mikami would then earn a TKO via doctor stoppage against Yoshiyuki Takano at HEAT 29 on the fifteenth of December.

Mikami would run his unbeaten streak to an impressive twelve fights by the time 2014 was finished. He would defeat Yasutaka Koga via unanimous decision at Tokyo Tribe Fight - TTF Challenge 02, and would then follow that up with another unanimous decision victory, this time over Takeshi Hara at HEAT - HEAT in Fukuoka on 13 October 2014.

Mikami would then suffer his first defeat in almost five and a half years when he was beaten by Adriano Moraes via unanimous decision at ONE Championship 25 on 13 March 2015. Mikami would recover from this setback by winning his second fight of 2015 at ONE Championship - Tigers of Asia on 9 October 2015, where he defeated Eugene Toquero via unanimous decision.