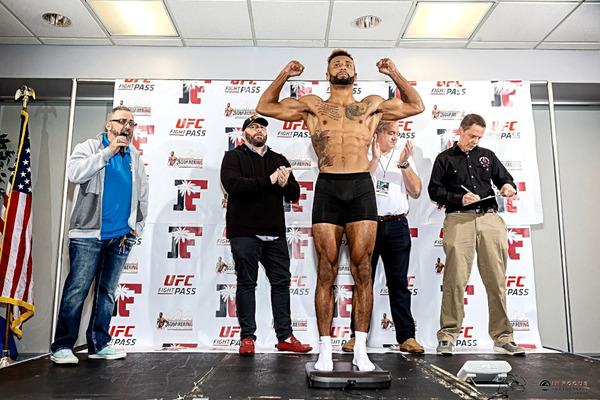 Fighting for a major organization has made Mike Davis ineligible for regional rankings.

Mike "Beast Boy" Davis Is an American mixed martial artist currently competing under the UFC banner in their lightweight divison. Davis has spent most of his career fluctating between 145 and 155 pounds. Mike made his amateur debut in 2011 against Chris Lewis. This fight took place at a catchweight of 150 pounds. Davis stopped Lewis by KO. He then went on to win his next 6 amateur fights before turning pro in 2015.

His first pro fight would come under the House of Fame banner where he wouold meet fellow debutant Richie Dehnz. Less than a minute into the third round Davis would put a stop to Dehnz via ground and pound. Davis would get one more win under the House of Fame banner before moving over to island fights where he would pick up three straight stoppage wins over Channin Williams, Anthony Retic and Montrel James.

His 5-0 record got him a fight on DW's Contender Series where he took on Sodiq Yusuff in a three round war. Sodiq edged it out to earn a close fought unanimous decision and handing Davis his first career loss. After this set back Davis returned to Island fights where he beat Elvin Leon Brito & Carlos Guerra. After these two back to back wins Davis was finally given the call up to the UFC as a short notice replacement against Gilbert Burns after  Eric Wisely was forced to withdraw from their fight. Davis went on to lose to Burns at UFC on ESPN+ 8.

After losing his debut Davis went into his next fight with a lot to prove as he took on Thomas Gifford in what is considered one of the most onesided beatings inside the octagon as Davis beat Giffords breaks off but Gifford continued to just barely stay in the fight. As the third round was coming to a close Davis landed a right cross on Gifford who finally collapsed to the canvas.

Following the absolute destruction of Gifford, Davis was scheduled to welcome undefeated UFC newcomer and two divison cage warriors champion Mason Jones. Davis entered the bout as a favorite and both fighters went to war. After three rounds Davis edged out a unanimous decision handing Jones his first defeat.
As of the 27th of July 2021 Davis has yet to be scheduled for another fight.