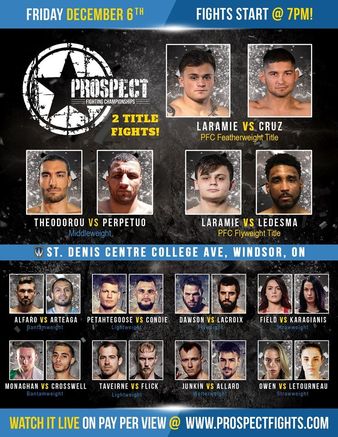 PFC 12: Laramie vs. Cruz
"The official Tapology discussion thread for the event!" (2 years)

Laramie vs. Cruz
Andrew Cruz, SUB, R2
I'm a little surprised. But I also understand the massive differential here. Cruz has bit me twice in a row, by submitting guys he was to get beat by. Bellator brought him in to take on an 8-2, Nate Stolen. Caught him with an Armbar. Then most recently, LFA brought him in to face a 10-1, Jon Neal. And he caught him in a RNC. I'm not counting him out for a 3rd time and paying for it. I think he's more than a legitimate threat to win here. I also think he's faced off with the better opposition, so maybe even a little better prepared. We'll see shortly.

so true brad!!! The shark was tired of seeing the spartan dancing around in the UFC and piling up this "streak" of really non impressive wins. He could have lost worse but didn't as he danced allright xD

Theodorou vs. Perpétuo
Hernani Perpétuo, DEC
Bit of a fall for the Worlds Greatest Striker!

Tapology members can make predictions for upcoming MMA & Boxing fights. PFC 12 is closed for new predictions. 76 total members made predictions on this event, breaking down as follows below.

Leaderboard of the best predictions by member: PFC 12 Leaderboard