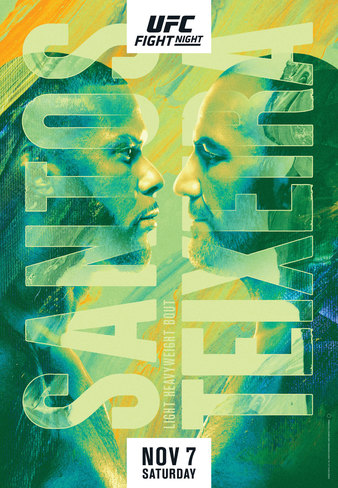 Moras vs. Melo
Sarah Moras, DEC
Vanessa Melo must be someones cousin, or maybe shes banging someone high up. She deserves to be cut way more than Evan Dunham did

Daukaus vs. Stoltzfus
Kyle Daukaus, DEC
Daukaus has such an impressive debut, and he didn’t even win it. I’m very excited to see what he’s got with a full camp.

Ferreira vs. Dober
Diego Ferreira, SUB, R3
Absolutely top flight fight....excellent match making. WOW. Ferreira will be too crafty for Dober. Dober got the powerful striking, but Ferreira is good on the feet too and will show superiority in Jiu Jitsu

Arlovski vs. Boser
Tanner Boser, TKO, R1
Boser a young killer at HW.....Arlovski is slow....Bose coming for that KO

Daukaus vs. Stoltzfus
Kyle Daukaus, DEC
Pretty cool undercard fight......Daukus is good and Stoltzfus was good in his CS debut. Daukus is more complete...both are grapplers....Daukus takes it.

Giles vs. Lewis
Bevon Lewis, TKO, R1
giles isnt that good. Bevon is a journeyman but will clip Giles

Griffin vs. Brahimaj
Max Griffin, TKO, R3
Griffin a journeyman but has some power and ability to beat Ramiz- who the **** is that guy?

Lopez vs. Colares
Gustavo Lopez, SUB, R3
Lopez not bad and from a strong camp. Colares....who the fook is that guy??

Griffin vs. Brahimaj
Ramiz Brahimaj, SUB, R2
Creepy dude is choking the halfwit, regional or not max going to sleep.

Arlovski vs. Boser
Andrei Arlovski, DEC
Even at 41 Andre is an acid test, and will probably prove is doser is a real hw.

Lins vs. Mayes
Philipe Lins, DEC
Maybe lins can do enough to sc**** a win. But he is a can. And Don'tale is a can too, so I think Lins is a better can of the two .

Santos vs. Teixeira
Glover Teixeira, DEC
Call me crazy but I like old Teixeira's chances here. Especially after he dominated Anthony Smith. He's still pretty tough, dangerous on the ground, very slow but good boxing technique and huge power. Thiago Santos has been hurt before. If Teixeira can survive the first two rounds, he has a strong chance here.

Elkins vs. Garagorri
Darren Elkins, DEC
I love that the UFC is giving Elkins one more chance to win after 4 losses in a row. 3 of those losses were to very good competition (Volkanovski, Lamas and Ryan Hall ! ), and the fight against Landwehr was pretty close... Rooting for him here.

Santos vs. Teixeira
Glover Teixeira, TKO, R3
Teixiera’s been streaking 4 wins, and his KO over Smith was nothing to

Heinisch vs. Allen
Ian Heinisch, DEC
Expierence gets the win here. Besides, he’s fought the likes of Derek Brunson and Omari Akmedov, he can handle Brendan Allen.

Lins vs. Mayes Changed from Confirmed to Cancelled

God damn. This is turning into a really good card. Arnold Allen vs Jeremy Stephens was THE fight to make at 145. We also have three solid slobberknockers at heavyweight now. And finally, my fight of the night: Dober vs Ferreira. Did the UFC hire a new matchmaker recently, cause this is a well put together card.

Ferreira vs. Dober Changed from Confirmed to Cancelled

Allen vs. Stephens Changed from Confirmed to Cancelled

God dammit. Can’t catch a break. This card went from being great to horrible real quick.

Shore vs. Taha Changed from Confirmed to Cancelled

Santos vs. Teixeira
Thiago Santos, TKO, R2
This is a really great fight, and I'm glad they made the LH title contention picture out the way they did. Even though realistically it should have been Santos vs Reyes for the belt just based off of arm-chair logic. The reason I'm glad for is because I think Teixeira gives Santos a better fight than Reyes would have considering how he looked against Jan. Teixera is likely to find his groove in the middle rounds if it gets there, but I don't think many picking Santos really expect this to go much past three rounds. Teixeira starts very slow, builds up hit combinations and spends the first round typically on the back foot. That is a bad first round strategy against Santos who comes in hot and builds momentum without really getting tired. The man swang for five rounds straight with one leg under him, and I can't disrespect that cardio+heart. I'm not going to say he's a lock against an older and slower Teixeira, but I will say, Santos has never struggled against someone unless they are significantly faster than him (or David Branch I guess?). Glover's path to victory: try to break the leg and circle off the cage. Thiago's path to victory: Pressure and connect before Glover finds his boxing groove.

Arlovski vs. Boser
Tanner Boser, TKO, R1
I'll be the first to admit I got Tanner Boser all wrong, I thought he was basically a ****** Roy Nelson. Boser has stuffed every TDattempt since his tenure in the UFC which is promising. But they were against predominantly striker's I don't think Arlovksi is the person to break that streak, but it is pretty much his only path to victory. I usually don't bet heavyweight unless your name is Overeem, but I think Boser is a good bet by KO in this spot. He's just about 63% striking accuracy at a good clip in his 3 UFC wins. Tuivasa, Lins, and Rothwell showed us that you need handspeed to catch Arlovski well enough to cleanly put the old dog away, and Boser clearly has that.

Barcelos vs. Taha
Raoni Barcelos, TKO, R1
I've been saying this for a hot ******* minute, but Raoni Barcelos would be the dark horse of 135 if he wasn't 36 years old. The man has two checkmates that he's able to pull out of the bag on almost every single opponent: Pull-counter KOs and upperbody takedowns. Honeslty, go watch all of his old fights, the man never take more than three steps backwards before cutting an angle or throwing a counter. Khalid Taha is a good fighter, and I expect him to do well in the UFC, but this match has Barcelos by KO (knee or cross) written all over it. Taha is a good blitzer, but that won't work against people who want you to come forward in a straight line so they can angle off and connect.

Heinisch vs. Allen
Brendan Allen, SUB, R3
I expect the first round to be a grind, and rather exciting, but I think Allen has all of the tools and the cardio to eventually bring Heinisch to his world. Heinisch is a good wrestler, but I don't know if he has the wrestling cardio to keep Allen off of him in the second and third. Heinisch needs a KO or to stay away from the fence.

Gadelha vs. Yan
Xiaonan Yan, DEC
This will be a fun fight to watch. I think it's been rebooked like three times, so these women should be as prepared for eachother as you can possibly be. That could either make this more exciting or a stalemate. I'm hoping for exciting.

Chikadze vs. Simmons
Jamey Simmons, DEC
I ******* hate Giga Chikadze. So I will not pick him. Please, for the love of god stop giving him the literal easiest fights in the UFC. Once again he's fighting a debutant who is a natural bantamweight. It's just a joke, because I know he sucks at MMA and the first decent wrestler he faces is going to school him. For laughs here's Jamey Simmons last fight

look, he'd kick my ass, but you can't honestly tell me he belongs in the UFC right now.

Giles vs. Lewis
Trevin Giles, DEC
If you were to tell me after watching the Krause fight that Trevin Giles has beaten Ryan Spann and Brendan Allen I would ask you if you were planning on sharing whatever it was you were smoking. But watching his tape, he did in fact beat them. Wanna hear something else even more unbelievable? Giles has a 100% TDacc rate according to UFC stats and Bevon Lewis has never had a fighter try to take him down in the UFC. Lewis also is 0-10 for TD attempts lol. I don't expect this to be an exciting fight, but I think Giles has the clearest path to victory here and I'm more comfortable picking him since he's never been TKOd or KOd.

Elkins vs. Garagorri
Darren Elkins, TKO, R2
Elkins vs Bektic, what a god damn warrior. Garagorri has been protected for most of his career and Elkins is a vet. I don't think Garagorri can punish Elkins like Landwehr did (despite Elkins being the better fighter IMO), cause that's really the only way Elkins is gonna lose here. Garagorri has 0 takedowns and a fledgling submission game. The vet gets a good win, and maybe retires???

Griffin vs. Brahimaj
Ramiz Brahimaj, SUB, R3
I really don't wanna pick this fight... I mean Griffin has great TD defence (if you exclude the Covington fight) but he can leave his neck open when he goes for takedowns, and Brahimaj has a filthy guillotine. It's no Darrick Minner or Shavkat Rhakmonov, but I wouldn't be surprised to see another debutant underdog get a guillotine finish in this fight. Probably Griffin by decision, but the odds are trash so I'll pick Ramiz.

Lopez vs. Colares
Felipe Colares, DEC
I'm gonna go with the underdog here. Lopez is dangerous in the first though.

@Hippie. Thanks man! Even if I'm pissed to have several of the better fights fall off, it's great to have a UFC card every weekend. GL on your picks.

By the way you swayed me with your argument for Fili over Mitchell. I lost 6k. So...
Let's just say You owe me one.

I think Glover path to victory is making it a grappling fight but Santos will probably time him with a big hook before it happen.